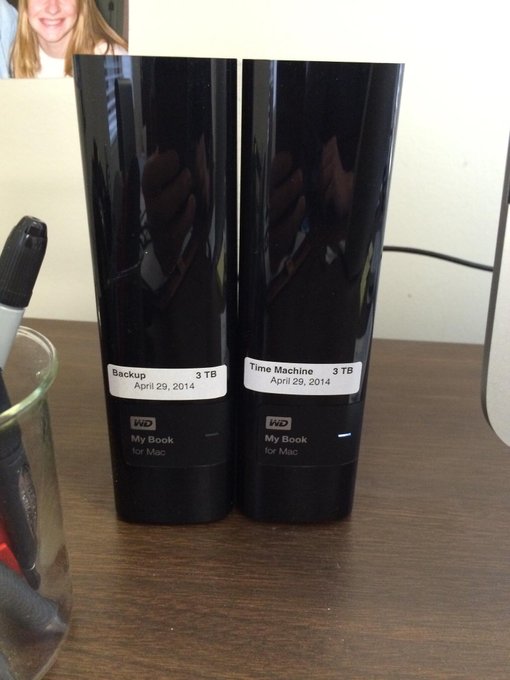 The previous pair were three years old, and although that isn’t especially old for a hard disk that doesn’t get continual use, they were also only 1 TB—that’s not ideal when you’re backing up a 3 TB drive, which is what I have in my current iMac.

The drives are Western Digital My Books. I’ve had good luck with Western Digital over the years, and these particular drives were given the top rating at The Sweet Setup. In the past, I’ve bought drives preformatted for Windows (because they’re cheaper) and reformatted them with Disk Utility, but this time the Mac-formatted drives were the same price, so I bought them, thinking it was the path of least resistance.

My local backup system is simple. One drive, TM, is dedicated to Time Machine, and the other, Backup, is a bootable backup under the control of SuperDuper!. The SuperDuper!1 backup runs every weekday evening, and I have an old Perl script that summarizes the SuperDuper! log file and displays the summary on my Desktop via GeekTool. It’s an easy way to see that the previous night’s backup was successful.

Unfortunately, after switching to the new drives, the backups weren’t successful. The SuperDuper! backup kept going onto TM, and Time Machine would sometimes try to write to Backup (which usually generated a failure, because I keep Backup unmounted except when SuperDuper! is supposed to be using it).

Office computer is confused about which disk is the Time Machine backup. This has the smell of disaster about it.
— Dr. Drang (@drdrang) May 3 2014 9:42 AM

I tried a couple of things I thought would fix the confusion, but eventually had to get some adult supervision. I sent an email to Shirt Pocket outlining my problem and got a quick reply from Dave Nanian:

Did you put these drives into service without formatting them, and are they WD externals?

Ah, I thought, he’s seen this problem before.

Turns out,™ Western Digital ships all its drives with the same UUID, and that’s what was getting SuperDuper! twisted around. I reformatted one of the drives, which changed its UUID, and since then, all’s been right with the world. Too bad the time I saved by buying Mac-formatted drives was more than wasted by the UUID confusion.

UUID is the acronym for Universally Unique Identifier, so it’s both wrong and oxymoronic for Western Digital to ship all its drives with the same UUID. When Dave told me about this, I literally exploded.