A couple of days ago, I mentioned a decent-looking Circa/Rollabind notebook that I’d found at Staples. It’ll be a nice one to have around the house, but it won’t be my go-to notebook for work. For that, I use a steno-style notebook that I made myself. It’s an updated version of one I built almost five years ago. That one, although still usable, started getting a little worn around the edges and at the discs along the top because its covers were made entirely of cardboard.1

This time, I used plastic covers that I bought directly from Rollabind during a big sale a few years ago. I turned them sideways, cut them to width, and sandwiched them between cardboard from Redweld folders. The layers are bound together with some spray adhesive I had lying around. They were put under heavy weights for a couple of days so the cardboard wouldn’t pucker in areas where the adhesive coverage wasn’t great. Surprisingly, the bottom hasn’t gotten too buggered up, despite continual use for a couple of years. Maybe that’s because it’s three layers of cardboard instead of just two. Even so, if ever make one of these again, I’ll be sure to use plastic all the way to the bottom.

So why do I use a steno-style notebook at work? Mainly because most of my handwritten notes aren’t made at a desk but in a lab or on a roof or under a piece of construction equipment. The half-letter size makes it easy to hold, and having the binding up at the top keeps it from interfering with my hand as I write. I keep a manilla divider page near the back and transfer completed pages to the end section, where they’re less likely to get torn or dirty.

Years ago, I tried regular steno notebooks—the kind you can just buy in a store—but their covers were too flimsy to make a good writing surface. Also, regular steno paper wasn’t the greatest for sketching. I use a paper with a Cornell-inspired layout, but with a main content area that has light vertical lines in addition to horizontal ones to keep my drawings reasonably close to scale.2 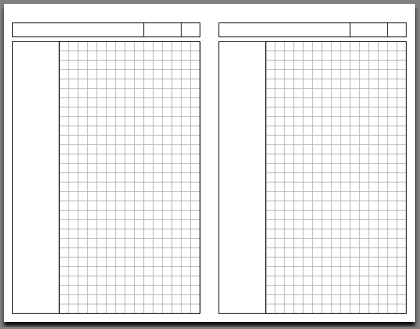 The title bar at the top is in three parts for the title (or project name), the date, and the page number. The nice thing about designing your own paper is that you get to make it fit your own quirks.

Levenger touts the Circa refill paper it sells as extra thick, but I just print these out on regular paper, cut them down the middle and punch out the mushroom holes. I’ve never had any problem with the pages being too weak to stay in the notebook.