My Circa steno notebook

I see that Levenger has introduced a steno notebook to its Circa line of products. As it happens, I made my own Circa steno notebook just a month ago. In this post, I’ll discuss pluses and minuses of Levenger’s notebook and mine.

If you’re not familiar with it, the Circa system—also sold under the Rollabind name—is a set of products that use discs to bind pages together. The discs have thickened edges, and the pages have a set of mushroom-shaped perforations along their binding edges to grab the discs. For me, the value of the Circa/Rollabind system is how it combines two features:

Side-bound notebooks with this type of binding have been around for a while. I’m quite happy using them at my desk or a conference room table, but they don’t work as well when I’m out in the field, holding the notebook in one hand and writing with the other. The discs along the side seem to get in the way, and the continual repositioning of my hands that results often shifts the paper out of its binding.

I used to use standard, spiral-bound steno notebooks in the field, and although I didn’t like the quality of the paper, the spacing of the lines, the flexibility of the covers, or the permanence of the binding, I did like the size of the paper and the position of the binding along the top edge. So about a month ago, I decided to make my own steno notebook with some spare Circa discs. Had I known that Levenger was planning to come out with a Circa steno notebook, I doubt I would have bothered. In fact, I was somewhat annoyed a few weeks ago—just a week or so after I’d made my steno notebook and before I’d done any field testing of it—to see this video from Patrick Rhone of the work. life. creativity website with a sneak peek of Levenger’s steno pad.

It turned out, though, that I hadn’t really wasted my time. Although Levenger’s steno looks very good—and I may end up getting one when mine wears out—there are enough advantages to a custom-made notebook to have made my time worthwhile.

The binding consists of six half-inch discs spaced across the top of the pad. 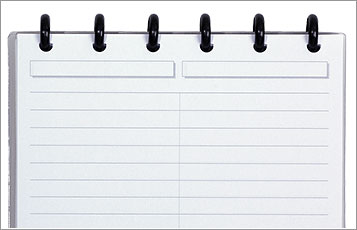 The covers are plastic, and there are four tabs between the covers for organizing different topics. Fifty sheets of Gregg-ruled paper come with the notebook, and Levenger sells refills (of course) for $12 per pack of 50 sheets.

I see two main advantages of the Levenger notebook:

My homemade notebook is shown here next to a Rollabind side-bound notebook that I bought for about $6 at Staples (I think Rollabind was redesigning their product line at the time and was dumping this style). 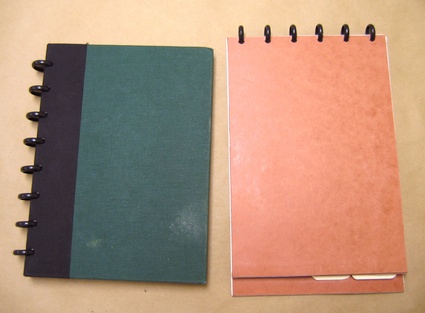 Like the Levenger steno, mine has six half-inch discs across the top, but because I’m using narrower paper, there’s less overhang at either end of the top edge. This makes for a slightly weaker binding, but so far I haven’t had any problems with pages detaching. 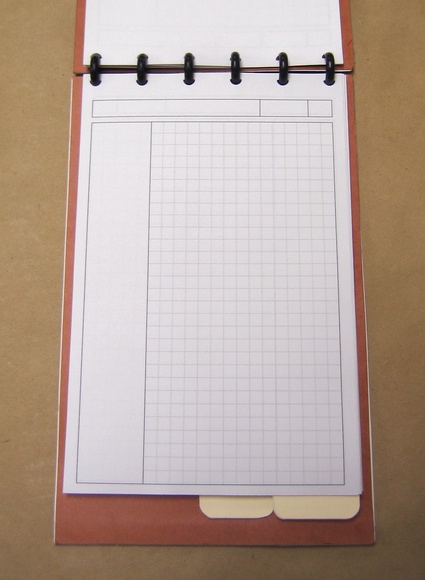 The pages are laid out in a modified Cornell style. I print them on 24 lb. paper in a two-up format, slice them apart with an old-fashioned guillotine paper trimmer, and punch the perforations with Levenger’s Circa Desk Punch.

I use the three boxes in the header for the project name, the date, and the page number. The squares in the main writing area are spaced at ¼″ and guide both writing and drawing. I made this layout by programming it directly in PostScript and converting it to PDF. Both the PostScript and PDF versions are available in this zip archive.

The tabs are simply (and rather crudely) cut from manilla file folders.

The challenge in making my own Circa notebook was in the covers. I wanted a thick, stiff cover that I could write on while holding the cover in the air. The two problems with making such a cover are

The solution to both these problems was lamination. I built the covers by punching thinner cardboard stock, inserting the discs into the perforations, and then gluing the thinner pieces together in layers with the discs in place. The thinner pieces were flexible enough to survive the installation of the discs without damaging the areas near the perforations. Gluing the layers together gave the final product the stiffness I wanted.

The cardboard I used came from expanding file pockets commonly found in office supply stores—Redweld is probably the most popular brand name.

Each cover is made from two thicknesses of cardboard. The front and back are the same width, 6″, but different lengths. The front is 8¾″ long, and the back is 9½″ long. This was a mistake. The front and back pieces of the expanding pocket are of different heights, and the lengths of my pieces come from those heights. I intended to cut all the pieces to the same length, but had punched, installed, and laminated the longer one before I remembered to cut it shorter. I could have cut it later—albeit with some difficulty after it was laminated—but I find the bit of extra length on the back cover useful. It gives me a bit more surface to steady my hand on when writing near the bottom of a page. It’s not a great feature, by any means, but it isn’t a disadvantage.

The advantages of my steno notebook are:

I’ve field tested my notebook on two occasions. The first was an outdoor project that lasted almost a week, 10-12 hours per day. I returned with over 30 pages of observations and test results. The second was a short indoor project of an hour or so with 3-4 pages of measurements and drawings. Here’s what I’ve learned:

On the longer project, another engineer asked where he could get a notebook like mine. He was disappointed when I told him it was a one-off.

Although I probably wouldn’t have made my own notebook if Levenger’s had been available, my do-it-yourself steno fits my way of working better and was worth the time it took to make. It’s durability, however, is still questionable. If I can’t get more than a few months out of it before the covers need replacing, I’ll probably go ahead and buy Levenger’s.