This morning I dropped our van off for a brake job and was killing time at a nearby Staples while my wife came to pick me up. While I was there, I found these house brand mini gel pens (item #636172) and picked up a box of twelve for about $5. 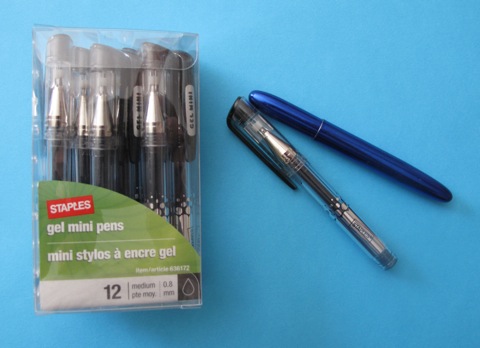 When closed, the pen is about the same length as a Fisher Space Pen, which is a convenient size for keeping in my pocket. When open, it’s a little shorter than the Fisher, but still easy to write with.

Why do I want to replace the Space Pen? Mainly because it doesn’t leave a smooth line. I’ve stuck with it because of its size and because its ink doesn’t smear. Generally, I prefer gel pens like the Pilot G2, but

The Staples pen leaves a smooth line that dries instantly on the paper I typically use. I can run my finger across something I’ve just written and get no smearing whatsoever.

Another advantage of the Staples pen over the Fisher is pocket clip. I doubt I’ll be cliping it in my pocket very often, but it will keep the pen from rolling off slanted surfaces, a constant problem with the Fisher.

The biggest downside of the Staples pens is that they feel cheap—mainly because they are. At least I won’t worry much about losing them. If I remember right, the Space Pen cost as much as four dozen of these.