Update 9/21/09
While all the logic and thinking behind the scripts in this post is still true, the scripts themselves have been updated. I’ve put everything in a GitHub repository to make it easy to download all at once.

For years I’ve been recording BBC Radio 2’s music shows with Rogue Amoeba’s Audio Hijack Pro. I import the recordings into iTunes and transfer them to my iPod or iPhone to listen to while biking, driving, or working. More recently, I’ve been copying the tracklists from some shows’ web pages and adding that to the iTunes Lyrics field so I can quickly look up the song I’m listening to. And, of course, I’ve been working on ways to automate the process.

In the past couple of months, Radio 2 revamped its web site; the web pages for all the shows now have a uniform layout, with links to the Listen Again streams and lists of the songs played. This makes the site much easier to use, and it also gives me an opportunity to automate my recordings. This post describes my recording setup and the various scripts I use to do the recording and extract the song lists.

I’ve described this sort of thing before, but that was before the Radio 2 web redesign. This post supersedes that earlier work.

Before the redesign, each show on Radio 2 had its own web page, or set of web pages. Typically, these pages would have a link to the Listen Again stream of the most recent episode. They might also include a list of the songs played in that most recent episode. The nice thing about this arrangement, for the purposes of automation, was that each show had a single URL for its Listen Again stream and a single URL for its general information page. The bad thing about the arrangement was that each show’s information page was organized in its own way; if you wanted to screen scrape the song list, you had to write a different scraping program for each show.

Now things are different. Instead of a page for each show, there’s a page for each episode of each show. The list of songs played on that episode are contained within a particular <div>. The title and artist of each song is set inside <span> tags with classes that identify the type of information. 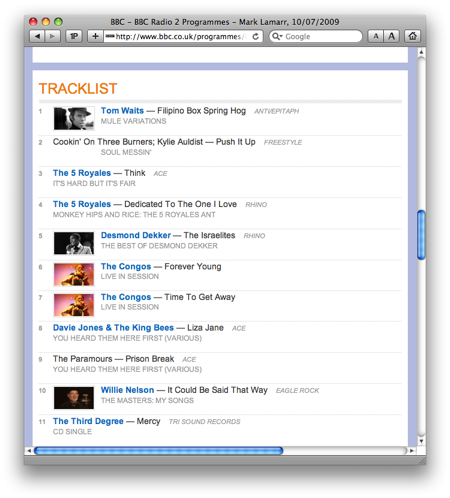 If the episode was aired within the past week, its page will also have a link to the streaming audio of that episode. Because this layout is the same for every show, we can write a single script to scrape the song list from any show. The only problem for automating this process is finding the URL for episode you want to record.

The key to finding episode URLs is the daily schedule page. Its URL is based on the date—today’s is http://www.bbc.co.uk/radio2/programmes/schedules/2009/07/21. The daily schedule page has links to every program broadcast that day, and its layout is logical and easy to scrape. Here, for example, is the schedule for last Saturday: 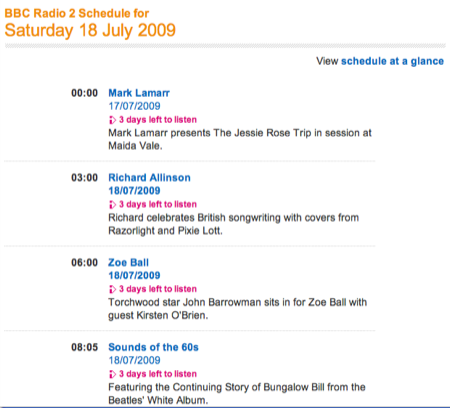 Audio Hijack Pro can be scheduled to record streams at our convenience—in the middle of the night, for example. To do that, it needs the URL of the stream we want to record. If this is a static URL, we just give it that; but if it changes from day to day or week to week—as the Radio 2 streams do—we need to write an AppleScript that will deliver the current URL to Audio Hijack Pro. The name and location of that script is entered on Audio Hijack Pro’s Input tab. 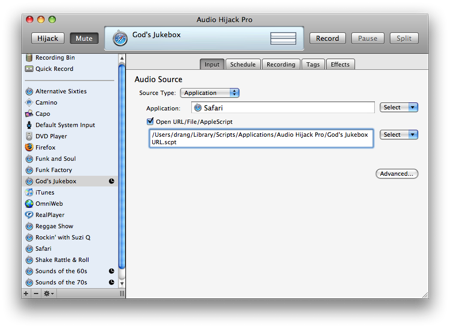 Audio Hijack Pro can also run scripts to post-process a track after it’s been recorded. We’ll use this capability to:

The name of the post-processing script is entered on Audio Hijack Pro’s Recording tab. 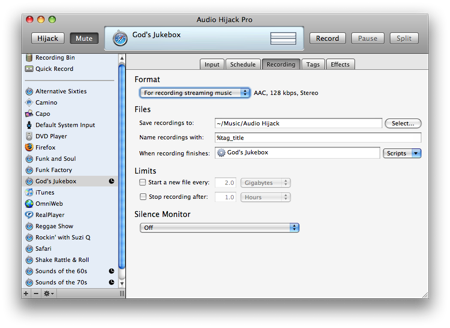 Unfortunately, the URL-finding script and the post-processing script have to be written in AppleScript because that’s the only kind of script Audio Hijack Pro understands. Since only the brave or the stupid would attempt serious HTML parsing and text processing in AppleScript, we’ll do the heavy lifting in Python, and then write AppleScripts that use do shell script to run the Python code.

Since both the URL-finding script and the post-processing script need the program’s eight-character code, we’ll write a Python module that contains all the programming needed to get that code, and we’ll import that module into both of the scripts.

HTML parsing will be done by the Beautiful Soup library. This is not part of the standard Python library, so we’ll have to download and install it using the instructions that come with the download.

The recentSchedule function makes use of what we know about the form of the URL for the daily schedule page. If we call recentScheduleURL(5) today, it will return

which is the schedule for last Saturday, the most recent Saturday (5) on or before today.

The programCode function opens the URL returned by recentScheduleURL and parses the HTML to find the link to the show of interest. It then pulls the eight-character episode code out of that link.

The programCode function uses the show day and name (which can be either a string or a regular expression), which are kept in the showinfo dictionary. I have the information for only four shows in that dictionary, but it can easily be extended.

The name of the module is “radio.py,” and it should be put in the /Library/Python/2.5/site-packages directory.

(If you’re on Linux or Windows, and want to modify my scripts to work on your system, you’ll have to put “radio.py” in the appropriate site-packages directory on your hard drive. You can find it by launching an interactive session of Python and executing

This will print out the full path name of each directory Python searches for modules, one per line. The one that ends with site-packages is the one you want.)

Script for getting the streaming URL

Now that we have the “radio2.py” module, writing a script that returns the URL of the audio stream of the most recent episode of a given show is easy. Here’s the Python program, called “radio2-stream” and kept in my ~/bin directory.

It takes as its sole argument a string that identifies the show of interest. The strings it recognizes are the keys of the showinfo dictionary defined in “radio.py.”

With this Python script in place, we can write the AppleScript wrapper that AHP will run to get the streaming URL for God’s Jukebox.

This is the entire “God’s Jukebox URL” script shown in the Audio Hijack Pro Input tab above. It can be stored anywhere; I keep it in the ~/Library/Scripts/Applications/Audio Hijack Pro folder.

Script for getting the playlist

The Python script for extracting the playlist from the episode page is called “radio2-tracklist” and is kept in my ~/bin directory.

Like “radio2-stream,” it takes as its single argument the string identifying the show of interest. It uses the programCode function of “radio.py” to construct the URL of the episode page and BeautifulSoup to parse the page’s HTML and get the title and artist for each track in the playlist. It then spits this information out in the form

with a blank line between each track. The episode date is put at the beginning of the output.

So if we execute

Update 9/3/09
A week or so ago, Radio 2 changed its internal nomenclature. The div with the tracklist, which used to have an id of type-musicsegment, now has an id of summary. That change is now reflected in Line 15 of radio2-tracklist.

Script for importing into iTunes

With “radio2-tracklist” in place, we can write the AppleScript that AHP will run after the show is recorded. Because there’s no way to pass arguments to an AHP Recording Script, we’ll have to write a separate one for each show. For God’s Jukebox, the script looks like this:

This is the “God’s Jukebox” script shown in the Audio Hijack Pro Recording tab screenshot above. It has to be kept in the ~/Library/Application Support/Audio Hijack Pro/Recording Scripts folder in order to be accessible through the popup menu.

As the comments at the top of the script indicate, this is just an extended version of the sample script Rogue Amoeba provides for importing AHP recordings into iTunes. The additions are 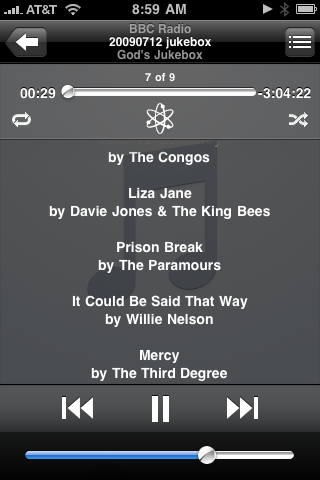 This system—a commercial program that calls AppleScripts that call Python scripts that call a Python module—is more complex than most of the programming I show on this blog, but it provides a seamless experience once it’s set up. The programs get recorded, popped into iTunes with song lists, and put into an iTunes playlist that’s synced to my iPod/iPhone the next time it’s docked. It took a some effort to get it working, but it’s been smooth sailing ever since.