Update (12/13/08)
Griffin’s iTalk recorder has displaced the apps discussed below on my iPhone. Here’s my review.

In a post I wrote just after the App Store opened, I said

There are several “voice recorder” apps, but I’ve yet to see one that claims to be able to copy the audio file back to your computer. Without that, recordings are pretty useless to me.

Things have changed in the past few weeks. I now have two apps that can move recordings from the iPhone to my computer.

The first is Recorder from Retronyms. Recorder costs $0.99 and presents an extremely simple user interface: a list of recordings you’ve made and a big red Record button. 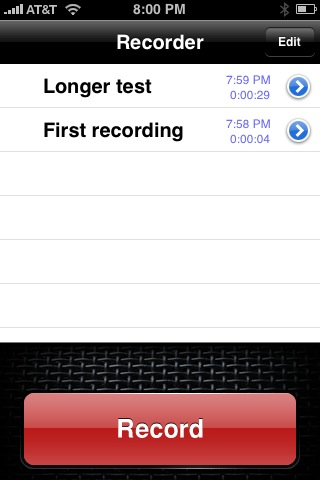 Tap the Record button to start a new recording. The button’s name changes to Stop and the elapsed time displays just above it. Tap the Stop button to stop.

When you’re done with a recording, it will appear in the list with the default name “Memo.” Tapping the name of the recording will start playback, tapping the arrow in the blue circle will take you to another screen where you can edit the recording’s name, see some statistics about it, and, most importantly, email it. 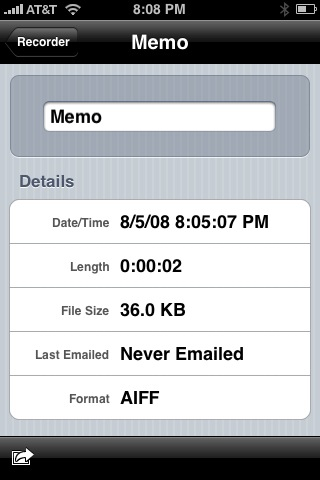 Tap the little black and white arrow button on the left side of the toolbar at the bottom of the screen and your recording will be uploaded to Retronyms’ site and an email will be created with a link to the recording. Most likely, you’ll want to send the email to yourself, but you could send it anyone—your secretary, for example. Whoever gets the email can download the recording by clicking the link, which takes you to a web page that looks like this. 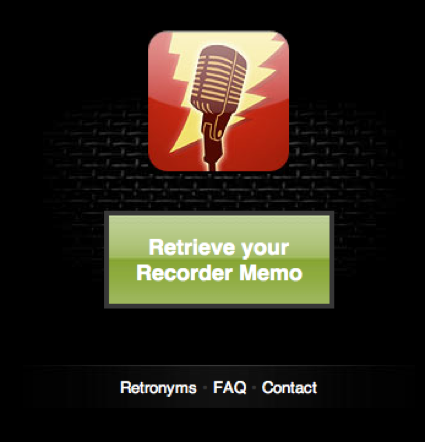 Clicking the green button will play back the recording, which is probably not what you want. Instead, control-click or right-click the button to download the file to your computer. The file is an AIFF, which should play on any computer.

There are two limitations to Recorder’s way of transferring a recording:

What makes Recorder useless for me is the lack of a Pause button. As I said in this post, I use voice recording for summarizing long documents as I read through them. This usually means a recording a couple of sentences, then reading several pages, recording a sentence or two more, and so on. A single recording, with the recorder paused between the short bursts of talking, is what I want. Which leads to…

QuickVoice Recorder, from nFinity, costs $1.99 and has the Pause button I need. The opening screen is only slightly more complicated than Recorder’s, with a list of recordings and two buttons. 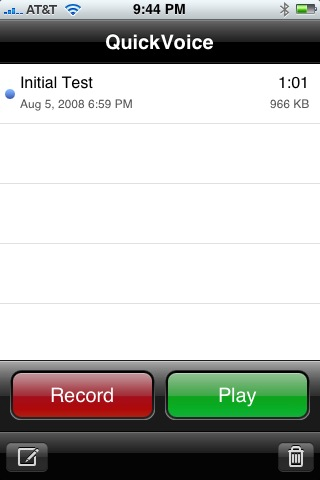 The default name for recordings in QuickVoice is “MyRecording.” This can be changed by selecting the recording in the list and then tapping on the edit button at the left edge of the toolbar at the bottom of the screen.

When you run QuickVoice Sync, the recordings on your iPhone are transferred to a QuickVoice iPhone Recordings folder inside your Documents folder. As far as I know, the recordings can be of any length. Running a separate application like this is a bit of a pain, but Apple doesn’t seem to allow automatic syncing through iTunes for anything other than its own apps.

The obvious limitation of QuickVoice is that your recordings can only be transferred to the computer you sync your iPhone with. For me, this is a relatively minor problem, and one that may be fixed soon. nFinity says they’re going to get email transfer working “shortly,” which would be a help if you sync your iPhone to a desktop computer but want access to your recordings while you’re on a trip with your laptop.

A less obvious limitation is the iPhone’s power-saving sleep settings. When going through a long document, I can have my recorder on pause for several minutes at a time. If I do that in QuickVoice, the iPhone goes to sleep during the pause. Upon awakening, QuickVoice appears to be ready to resume recording, but it isn’t. Tapping the Resume button causes QuickVoice to quit, and the iPhone goes back to its Home screen. Fortunately, the recording is saved up to the point where the iPhone fell asleep, so nothing is lost. But I do have to start a new recording. In theory, I could touch the screen every couple of minutes to keep the iPhone awake, but that would break my concentration on what I’m reading.

The sleep problem will probably keep me using my Olympus DS-2 for most of my recordings in the office. But I think I’ll start using QuickVoice on the road. The small drawback of having to wait until I get back to the office to transfer the recordings is outweighed by the advantage of having one less thing to pack for my trip.