We had some pretty high winds in the Chicago area on Friday, and when I got home from work, I was greeted by this: 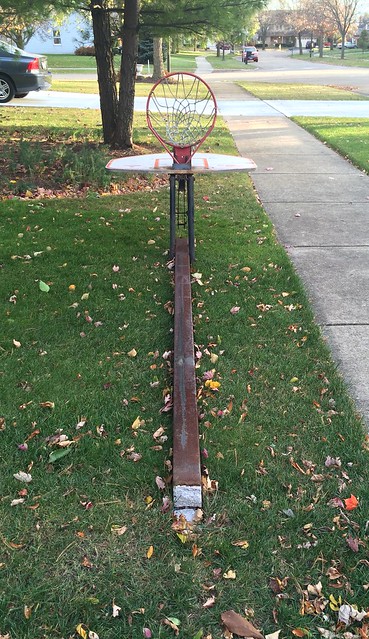 The winds were mainly from the north, and that’s the direction the hoop faced, so the backboard made for a nice sail with a long moment arm, and broke off the post at its base. There was no mystery as to why the post was weak enough to fail. Here’s a closer look at the base: 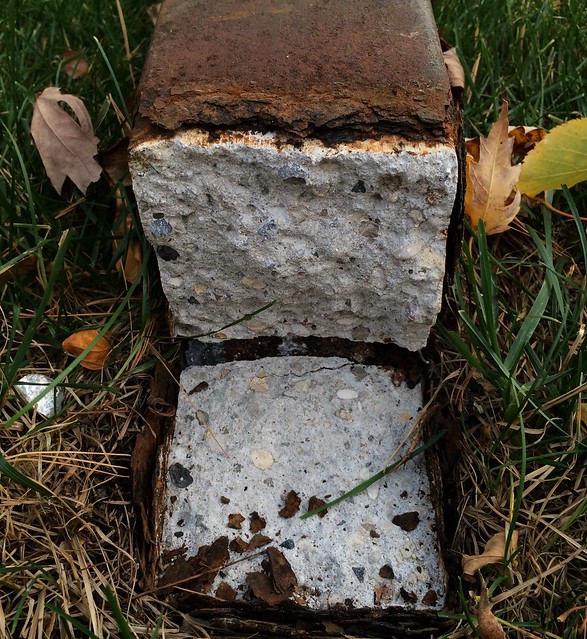 The post was almost all rust, with little if any competent steel left. This kind of rusting at the bases of posts and poles is pretty common. Water runs down and collects in little crevices, where the rusting initiates. In this case, the soil around the post, combined with the buried concrete in which the post was embedded, conspired to keep moisture in contact with the post, accelerating the corrosion process. A more common problem is hollow poles that don’t allow drainage of the moisture that collects inside. These are insidious failures because the steel rusts from the inside out, giving no visible indication of how far it’s progressed until the pole falls over.

The basketball hoop was set up by the previous owner of our house and has probably been standing there for 30 years. Many years ago, a neighbor told me I’d have a hell of a time removing it because it was set in a huge plug of concrete in the ground. So I was delighted by the way it broke off. The exposed end is flush with the ground, and all I have to do is cover it up with a little soil.

As you can see, the post was filled with concrete near the bottom,1 and you may be surprised that a solid plug of concrete like that broke off. You shouldn’t be. Concrete is quite weak in tension—a rough rule of thumb is that its tensile strength is one-tenth of its compressive strength—which means that it needs to be reinforced if it’s going to carry significant bending loads. As the steel was eaten away, the concrete was forced to carry more of the load, and it was just a matter of time before there’d be a wind strong enough to break it.

The north (near) side of the plug was put in tension by the wind. The crack started there and progressed rapidly over the cross section until the fracture was complete. Do you see the small cracked piece near the south (far) edge? That’s what’s called a compression chip and is commonly found on the compression side of brittle materials that fail in bending. Even if the post had been taken away, leaving only the piece in the ground, the compression chip would have told me which way the pole fell.

There are some other interesting things we can see in this failure. First, the concrete looks to be pretty strong. The clue to this is in the broken aggregate.2 Weak concrete tends to break around the aggregate; strong concrete tends to break through it. Of course, if the aggregate itself is weak—and there’s always some weak aggregate in concrete—this can be a false clue. In this case, though, aggregate of various colors and types are broken, and that’s a pretty good indication that the stronger aggregates as well as the weaker ones have failed.

That this concrete is fairly strong isn’t a surprise, even though it was mixed and placed by an unskilled homeowner. Concrete is, fundamentally, a mixture of three ingredients: cement, aggregate, and water. It gets its strength through a chemical reaction between the cement and the water. This reaction, called hydration, starts rapidly and slows with time, but it never stops as long as unreacted cement and water are still present. As a result, old concrete that’s been protected from weathering is often very strong.

The other interesting thing you can see in the photo is the lamellar (sheet-like) structure of the post wall remnants. This is very common in heavily rusted steel, especially when there’s no erosion to scour away the flakes of rust. You may also notice that the post walls look quite thick. They weren’t. The thickness you see now is due to the expansion that steel undergoes when it rusts. There’s a great photo on the Wikipedia page for rust that shows how the expansion of rusting steel can split concrete. 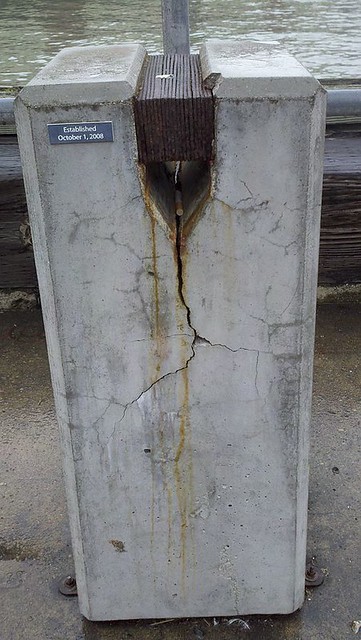 This is not merely a museum demonstration. Moisture often penetrates concrete and reaches the reinforcement buried within it. The rusting of that reinforcement causes it to expand and spall off chunks of concrete. This doesn’t lead to immediate failure—the reinforcement is generally carrying the bulk of the load, so losing the concrete doesn’t mean a huge loss of strength—but it further exposes the steel and leads to more rapid oxidation and eventual loss of strength. And it’s ugly. 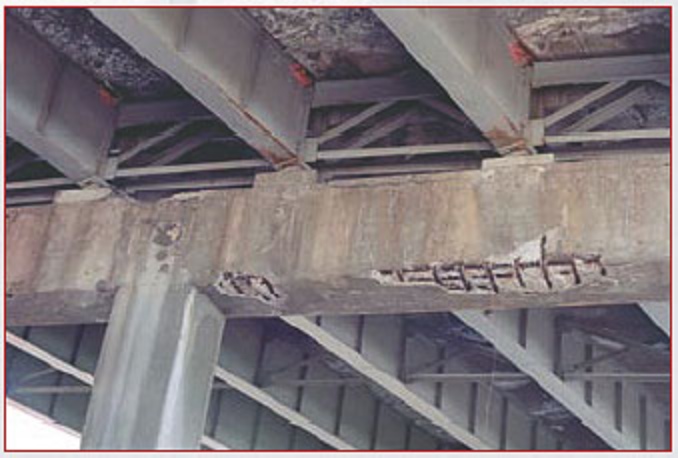 Given how thin the walls were, the decision by the previous homeowner to fill it with concrete was almost certainly the reason it stayed up for 30 years. A hollow post that thin would have rusted through from the inside out in much less time.

On the other hand, the post is now going to be a pain in the ass to get rid of. A 4″×4″×9′ prism of concrete weighs about