Engineers are the bastard children of scientists and tradesmen. You can see this in the requirements for getting licensed as an engineer. To qualify for a license, you need a certain amount of education from an institution of higher learning, and you must pass tests that evaluate your skills in mathematics, physics, and chemistry—that’s the scientist part of your parentage. But you must also prove that you’ve spent a certain number of years working under the direction of licensed engineer, which is exactly the sort of apprenticeship a carpenter or millwright has to go through.

This hybrid heritage carries through into the language of engineering, where we use everyday words (tradesman) to express precisely defined concepts (scientist). This makes it difficult to communicate engineering principles to nonengineers because we use many words in ways that don’t match up with their colloquial meaning. I’m sure you can come up with examples of this in other professions—even science does it to some extent—but in engineering, many of our most fundamental ideas and properties use common words.

My favorite example is in the use of the words stress and strain. To an engineer, these are very different things. Stress is the internal force per unit area that one section of a body exerts on another; it can come from external forces, changes in temperature and humidity, or the manufacturing process that created the part in the first place. Strain, on the other hand, is a measure of a body’s deformation—stretching, shrinking, and changes in shape are all examples of strain. There are, to be sure, relationships between stress and strain—our old friend Hooke’s Law is one of them—but they are not, not, not the same thing.

Unless you look them up in a thesaurus. 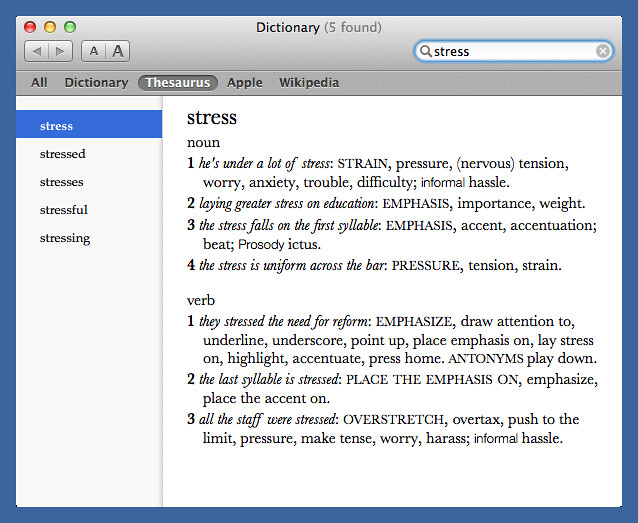 Not only is strain given as the first synonym for stress, it’s even included in the fourth, more “technical” definition. So when engineers talk about stress and strain to civilians, they can be pretty sure their audience will see no distinction between the two words unless they’re defined carefully at the beginning. This is like talking about art and having to explain what paint is.

Worse yet, there are concepts closely related to strength that have different names. Hardness is a good example. In the weeks leading up to the release of the iPhone 6, there was much talk about it being outfitted with a sapphire screen. Sapphire, it was said repeatedly, was harder than glass and would therefore be stronger and just plain better. The proof of this, we were told, was on the Mohs hardness scale, where sapphire is higher than glass.

The Mohs hardness number is a measure of scratch resistance, and it’s perfectly true that higher is better when it comes to avoiding scratches. It’s certainly a type of strength that needs to be considered, but not to the exclusion of others. If you drop your phone on a concrete sidewalk, scratch resistance isn’t going to save your screen. You need impact resistance, which involves the ability to absorb energy. For a thin sheet, that usually means the ability to flex significantly without breaking—not a property that’s intrinsically allied with scratch resistance.

Tim Bajarin at Time was promoting sapphire in August, but to his credit, he got himself educated after the iPhone 6 introduction and wrote a good explanation of why Apple stayed with Gorilla Glass. I’m not thrilled with his “sheet of ice” analogy, but the rest of the article is worth reading.

Today’s controversy is about the (permanent) bending of some iPhone 6 Pluses. Given that the iPhone 5 and 5S could both bend,1 it shouldn’t be surprising that the longer and thinner iPhone 6 and 6 Plus would bend, too. Apart from the geometric factors, the property that’s most important in determining the load at which the phone starts to take on a permanent bend is the yield strength of the aluminum frame.2 The yield strength is the highest stress for which a material will spring back to its original shape when the stress is removed. It is the boundary between elastic and plastic behavior, and is almost always one of the strengths that govern the design of metal structures.

Other strength-like words that have a specific meaning to engineers are durability and toughness. All of these words—strong, hard, tough, and durable—have positive connotations, which get in the way of explaining their negative aspects. How can something possibly be too strong, too hard, or too tough? If engineers were smart, they’d be like physicians and use Latin names. Not only does that avoid confusion with everyday meanings, it sounds a lot more impressive.