I’ve had a couple of iPhone/iOS 7 topics rolling around in the back of my head for the past week or two1, and it’s time to flush them out.2

First, a followup to my post about iOS 7’s layers and its errors in the depiction of parallax with the Control Center. Near the end of that post, I suggested that the best way to fix the error would be to have the Control Center move in response to tilting of the phone. Shortly after that post was published, I got this tweet from Jay Torres:

@drdrang With the share sheet, parallax works as it should. 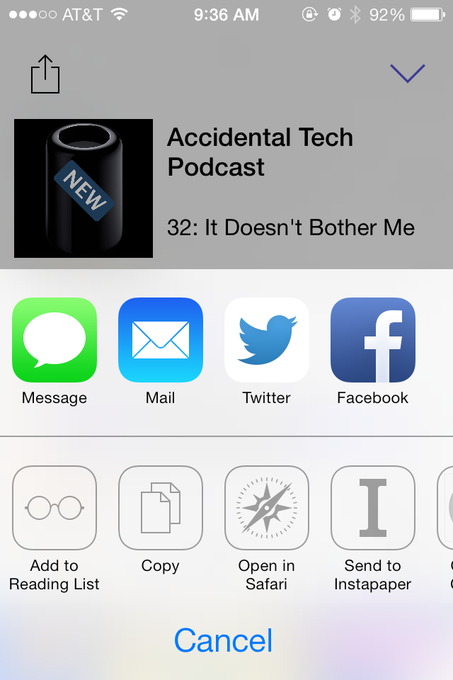 A single screenshot doesn’t tell the story, so here are two from Safari, one with the phone tilted forward and one with it tilted back: The pane moves to hide different amounts of the (stationary) app content behind it, matching how parallax would work if they really were in different planes. All the Sharing panes I’ve tried work this way, so it must be a system-wide feature of iOS 7. This makes the lack of proper parallax in the Control Center even more curious. I’m guessing the Control Center programmers just ran out of time as the release date approached.

Second, I’ve been having a small but persistent audio problem that can be really annoying. Every few days, the audio controls in the Control Center stop working. Play/pause, volume, skip—none of them work. In and of itself, this doesn’t bother me much because I don’t use CC’s audio controls very often, but the bug goes hand-in-hand with another problem that bothers the hell out of me.

My car has Bluetooth, and I usually listen to podcasts (via Downcast) as I drive. When I want silence, I push the big physical play/pause button on the dashboard rather than fumble around with the phone. But when the audio Control Center problem appears, the play/pause button on the dash also stops working. Pushing it to pause only pauses while I have my finger on the button—as soon as I release it, playback starts again.

At first I thought this was a Downcast bug, but a little testing soon proved that the audio controls for the Music app suffer the same problem. I suppose it could still be Downcast that triggers the bug, which, once tripped, persists across all audio apps, but that seems like a stretch. Plus I think I’ve seen others complain on Twitter about similar problems with Instacast.

Update 10/18/13
A couple dozen folks on Twitter have told me they’re having the same problem with audio controls. Most of them aren’t using Downcast, so it’s pretty clearly a system thing.

Remember the iPhone introduction where Jobs said it was “an iPod, a phone, and an internet communicator”? It’s always been an indifferent phone (although you could argue that’s mostly AT&T’s fault). Now its iPod controls aren’t trustworthy. Luckily, it’s the internet communicator aspect that makes it the most valuable to me.