Have you been acting like Scarlett O’Hara when it comes to the impending Google Reader shutdown? “I’ll think about that tomorrow… Tomorrow is another day.” Well, there are only a couple of tomorrows left; and if you’ve sworn, as God as your witness, you’ll never go hungry for RSS feeds again, you’d better get a move on.

The issue raised by Google’s decision to drop Reader isn’t with reading, it’s with syncing. Most of us read our RSS feeds on more than one device and we want a syncing service that allows us to pick up on our iPhones where we left off on our laptops. There were a few non-Google syncing options before Google’s announcement in March and more have arisen to fill the void since then. How do you decide which one to go with?

For a while, there wasn’t much information around to help you make a decision, but that’s changed recently:

I’m sure there are others, but these should be enough.

As for me, I signed up with Feed Wrangler a few weeks ago and have been generally happy with the results. There’s one thing about it that’s bothered me and another thing that I can imagine might bother you, so let’s talk about them.

First, the thing that might bother you: Feed Wrangler has no concept of folders. You can fake folder through the use of a feature called Smart Streams (Shawn’s post talks about that), but if you had organized your feeds in Google Reader in a large set of folders, be aware that that organization will be gone when you import those feeds into Feed Wrangler. And reorganizing your feeds via Smart Streams will be tedious. It’s not like digging a ditch in the hot sun, but it’s not something that’ll bring a smile to your face, either.

I had a half-dozen or so folders in my Reader setup, and when I saw that my system had been flattened out during the import process, I shrugged. I’d set my folders up long ago, when I thought I’d actually care about reading all my Politics or Computers feeds together. I can’t remember the last time I decided to read just from one of those categories—it’s been years—so the loss of categories meant nothing to me.

(I was kind of surprised to learn that Katie Floyd was happy with Feed Wrangler. She described in the podcast a fairly elaborate set of folders that she’d created in Reader, and I couldn’t imagine her wanting to give that up. I wondered if maybe Feed Wrangler had some folder-like structure that I’d missed during the import. So I asked her on Twitter, and she said no, she’d gone through and created Smart Streams for all her old folders. Ick.)

Since I’ve mentioned them a few times, now, I suppose I should explain what Smart Streams are. They’re similar to smart folders in iTunes: a way of automatically collecting feed articles together under one heading according to some set of criteria. At present, the criteria are limited to search terms and feeds, although you can use the search terms both positively (show me all the feeds that include “python”) and negatively (filter out all feeds with “sxsw”). Feed Wrangler’s developer, Underscore David Smith, says more complicated criteria, including boolean combinations, are on the way.

Although Smart Streams are supposed to be Feed Wrangler’s killer feature, I haven’t found much use for them yet. David Sparks uses filters to weed out articles he isn’t interested in from high-volume sites like The Verge. I can see where this would work, but I prefer to filter The Verge through the simple expedient of not subscribing to it in the first place. That’s a filter that never gets fooled.

Before I get into what bothers me about Feed Wrangler, I should mention that, apart from the folder thing, the import from Google Reader is just as slick as can be. Clicking the Add Feeds link1 brings up this set of choices. If you click the Import from Google Reader link, you’re taken to an authorization page (assuming your Google account’s cookie hasn’t expired) where you click the Accept button. That’s it. It may take a minute or three for all your subscriptions to come over, but your work is done. Now for what bothers me. Feed Wrangler—through both the web site and the iOS app—has hooks for sending articles to Instapaper, Pinboard, and Pocket. You enter your login credentials for these services in Feed Wrangler’s settings and that’s how you get access to them—basically the same way these things work in Tweetbot, Reeder, and other apps.

The problem is you can have only one of these services active at any time. The button for sharing a link is in the center of Feed Wrangler’s bottom bar, and there’s only room for one.2

In the MPU episode, David rightly points out that it takes only one click for him to send an article to Instapaper—much faster than with most other apps. That’s great if you use only one of these services, but I use both Instapaper and Pinboard. I don’t see them as different versions of the same sort of thing, where one can be substituted for the other. If I set up my credentials for one, I’m locked out of the other. Not happy about that.

As you can see, Pinboard is my active service because I tend to use it more than Instapaper. But I’d be happy to give up the one-click advantage to get the option of using either one. Reeder does this through a popup screen, which requires only two clicks.

Speaking of Reeder, there was some good news today. Reeder 3.2 was just submitted to the App Store, and it includes support for Feed Wrangler. 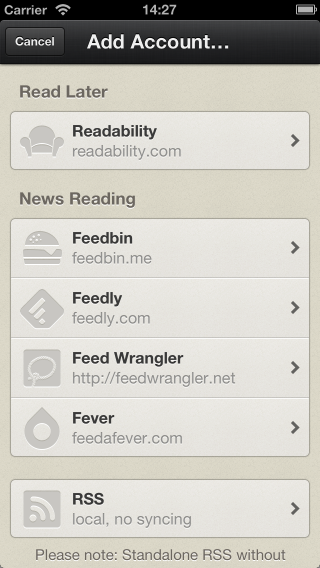 Apart from the Pinboard/Instapaper thing, I’ve been satisfied with the Feed Wrangler iPhone app, but I’ve missed Reeder. Looking forward to going back to it soon.

For feed reading on the Mac, I’ve generally just used web interfaces—Bloglines, then Google Reader, now Feed Wrangler. Feed reading is so similar to regular web browsing, it’s just always seemed easier to do it in a browser. ReadKit may change my mind about that.

An application that won’t change my mind is NetNewsWire 4, even if it does start syncing with Feed Wrangler. Or any sync service, for that matter. I understand that people have a warm feeling for NNW because they used it back in the pre-Google Reader days, but I just can’t generate any excitement for it. Frankly, I don’t give a damn.