I really liked Marco Arment’s post last week on how he tested his first set of Coffee Joulies. Joulies are the little bean-shaped things that are supposed to cool your coffee quickly to the optimal drinking temperature and keep it there for a long time. Their manufacture was funded by a very successful Kickstarter project that Marco talked about on an early episode of his Build & Analyze podcast. The upshot of Marco’s testing is that the Joulies don’t work very well. After reading his post I had some ideas about why that’s so, but I didn’t want to write it up until I heard him discuss his testing on the most recent B&A episode. Now that I have, it’s time to inflict my thoughts on you.

Let me start by saying I have virtually no interest in coffee itself and find all discussions of the perfect roasting, grinding, brewing, etc. unbelievably tedious. And not just because I’m a tea drinker. Although I have my likes and dislikes, I’m not in the Cult of Tea, insisting on precise water temperatures and steeping times. My position on tea brewing closely parallels Arlo’s:

I even—British readers, avert your eyes—put sugar in my tea.

Update 8/16/11
Apparently, sugar in one’s tea isn’t as déclassé in the UK as Radio 4 has led me to believe. I blame Laurie Taylor for my cultural misunderstanding.

So anyway, my interest in Joulies is purely academic. It’s an intriguing bit of engineering, trying to take advantage of certain physical properties of a material to make a clever and useful product.

The physical property at issue is the heat of fusion, the heat input required to change a material from solid to liquid. You may remember from physics class a graph like this: The same graph can also be used to describe the temperature changes as heat is extracted from water, but in this case time would march from right to left instead of left to right.

This is the behavior Joulies are trying to capture, except that the material in Joulies has its solid/liquid phase transition at about 60° C (140° F) instead of 0° C. I don’t know what the material inside the Joulies is, but The Handbook of Chemistry and Physics lists many organic materials with melting points at or near 60° C. The Joulies website says only that it’s a lightweight, food-grade material surrounded by a thin stainless steel shell.

Marco’s tests, though, show that a mug of coffee with Joulies cools at at rate that’s almost the same as a mug with no Joulies.2 Here’s his graph of one comparison test: 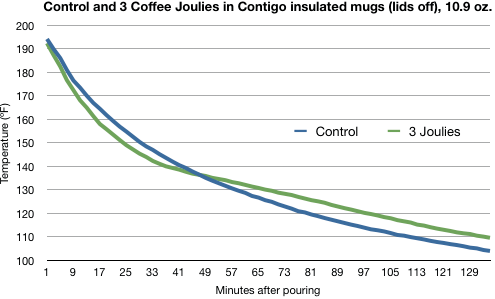 The faster cooling early on is no surprise. The Joulies are initially at room temperature and must absorb heat from the coffee to rise to its temperature. Anything you put in the mug would—qualitatively, at least—behave the same way.

The slowdown in cooling that we see in the green line between 150° and 140° is certainly due to the Joulies trying to hold to a constant temperature during the phase change. But by the time the coffee is about 130°, the two mugs are cooling at an almost identical rate.

So the Joulies have definitely had an effect in this test, but it’s pretty small. The temperature difference between the coffees is never more than about 5°.

This was actually the best test for the Joulies. In the test performed in ceramic cups, the coffee temperatures were practically indistinguishable.3

OK, so why don’t they work better? Let’s go back to the fundamentals.

The rate at which cooling occurs depends on:

The first two are the same for coffee with and without Joulies, so we need to focus on the third.

The heat content of the coffee itself is governed by the specific heat of water, which is by definition 1 calorie per gram per degree Celsius. On a volumetric basis, 1 calorie of heat is required to change 1 cubic centimeter of coffee by 1° C.

For a cup or mug with Joulies, some volume of coffee is replaced by the shiny beans, so we have to compare their heat content, which comes from both the stainless steel shell and the mystery material within, to that of the coffee.

The stainless steel shell of the Joulie has a specific heat of only 0.119 cal/g∙°C, but stainless steel is 8 times as dense as water, so on a volumetric basis 0.955 calories of heat is required to to change 1 cc of stainless steel by 1° C. Because this is so close to the value for the coffee itself, we can say that the replacement of a certain volume of coffee in our cup with stainless steel has no significant effect on the total heat content.

My guess is that the material inside the Joulies just doesn’t have a high enough heat of fusion to work the way you’d like it to. The necessity of using a safe, food-grade material with a melting/freezing point near 140° probably put a severe restriction on the compounds the Joulies’ inventors could choose from. There are probably some really toxic substances that would do a better job of keeping your coffee warm, but they weren’t suitable, even inside the stainless steel shell.

That’s it for the material. I can thing of one other factor that may be limiting the Joulies’ effectiveness: a lack of mixing. Even if the Joulies are staying close to 140°, the coffee that’s not in contact with the Joulies isn’t being warmed by them. There will be convection currents in the coffee, but they may not be strong enough to do a good job of mixing.

So we have a product that sounds like it should work because it’s based on real physical behavior. It has a cute and scientifically resonant name. Unfortunately, it doesn’t work much better than good insulated mug. Too bad.

Or maybe not. The Joulie inventors seem to be doing well. The Kickstarter project raised about 30 times the money they were asking for, and Marco is certain that Joulies will sell despite his tests. He’s probably right—coffee fanatics are delusional. Here’s a rave review by a coffee blogger who declares the product a success after a laughable test:

We brewed the Hario V60 using twenty grams of coffee and three hundred milliliters of water at around 200 degrees. 30 second bloom, 2:00 total pour, 2:45 brew time. We added three Coffee Joulies to the ten ounce cup of coffee and watched as the thermometer slowly crept down. When the coffee had finished brewing through the V60 it reached a temperature of around 155 degrees – totally drinkable and absolutely delicious. The coffee went down in temperature and hit 140 degrees at around five minutes, staying there for quite some time.

“Quite some time.” Lord Kelvin would be proud.