There’s not much to this command. The basic idea is to count the words in the document and divide by the average reading speed. The word count is done by the venerable Unix utility wc, and the average reading speed is taken to be 250 words per minute, which is in the range of values I found in Wikipedia and other online sources. I don’t know, but I’d guess that iA Writer is using either that figure or a value close to it.

Here’s the command, as shown in TextMate’s Bundle Editor: 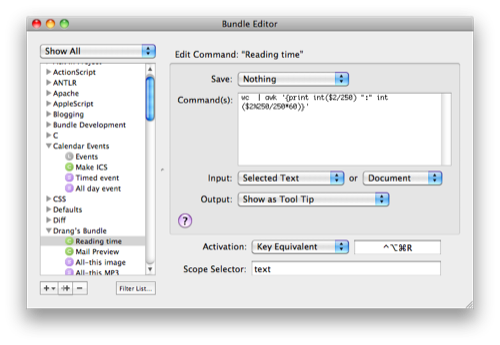 The pipeline in the Command(s) field is this:

The wc command returns the word count as the second item of output, which is why you see $2 in the awk command. The hardest part is the gymnastics in awk that turn decimal minutes into minutes and seconds.

If text is selected, this command shows the reading time for that text; otherwise it shows the reading time for the document as a whole. I have the Key Equivalent set to ⌃⌥⌘R, which is easy to type and easy to remember. I tend to use the Control, Option, and Command modifiers for all my commands because those keys are lined up next to one another and are easy to press simultaneously.

Update 6/4/11
Reader Shawn Medero in the comments pointed out an error in my pipeline, and I’ve made the correction in the text above (the screenshot still has the error). My mistake was not to ensure a leading zero after the colon if the number of seconds was less than 10. In the original, a reading time of 3 minutes, 7 seconds would be shown as 3:7 instead of 3:07.

This particular error in formatting minutes and seconds is one I’ve made so many times that I suspect there’s some defect in my brain that’s preventing me from ever learning from the mistake. Since the error manifests itself on the average once every six times the script is run, I usually catch it pretty quickly. This time Shawn caught it for me.

Shawn also describes how to use Automator to turn this into a system-wide service instead of a TextMate-specific command. I’m beginning to think the post would have been much better if he had written it instead of me.

Update 6/5/11
See this post for an improved TextMate command, a Service, and a Safari extension.