I’m not sure how many years I’ve been using OmniGraffle, but throughout that time I’ve been annoyed by a few of its choices for keyboard shortcuts. I settled into a pattern:

Miraculously, a few days ago I managed to remember this annoyance when I had time to do something about it, and now I have a set of shortcuts that make sense to me.

Here are the problem shortcuts and what I changed (or in a couple of cases, didn’t change) them to.

The zoom commands were my primary target. Omni apparently thinks of OmniGraffle as more of a writing tool than I do, which is why it used the simpler ⌘+ and ⌘- to change the font size. I think of OmniGraffle as primarily a graphics tool, so I want those shortcuts for zooming, with more complicated shortcuts for text resizing. Now the zoom shortcuts match those in Preview, which is what my fingers are more used to.

I found the commands in the Arrange menu very difficult to remember. Was it Group that needed the Shift key and Lock that didn’t or was it the other way around? And which one used U to undo the action and which used the Option key? The Arrange menu, as it comes from Omni, is just a mess. 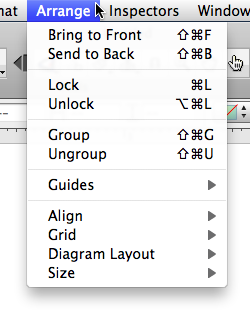 With my changes, it’s much more consistent. 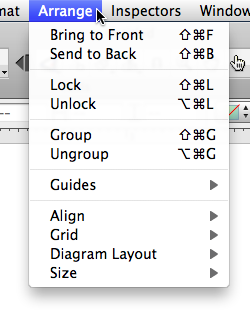 It’s amazing how small changes like this can improve your experience with an application. Now I zoom in and out much faster, and I don’t ever have to pull down the Arrange menu to access the Lock/Unlock or Group/Ungroup commands.

The way to change keyboard shortcuts is through the Keyboard Preference Pane in System Preferences. Apple’s instructions were written for Leopard, but apart from a few obvious name changes (e.g., there is no Keyboard & Mouse Preference Pane anymore; it’s been split in two) they still apply. 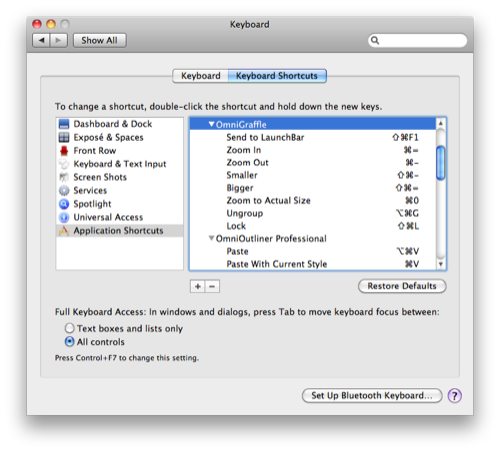 Old-time Mac users will remember how we used to change keyboard shortcuts.

Those were the days, eh?