The National Transportation Safety Board put out a press release today, summarizing its initial findings in the investigation of Southwest Flight 812. That was the flight that had make an emergency landing a few weeks ago because a five foot long hole ripped through its fuselage during a flight. It’s a very well written summary—better, I think, than the NY Times story on the same topic, although the Times story does have the advantage of including the opinions of experts less reticent than the NTSB.

Let’s start with what’s in the NTSB press release. First, the size and position of the rupture are described: a 59″ long by 9″ wide hole above and behind the left over-wing exit door, near an interior support member known as “S-4L.” The investigators cut out a section of the fuselage that contained the skin, and the press release includes this excellent pair of photographs showing the removed section from both the inside and the outside. 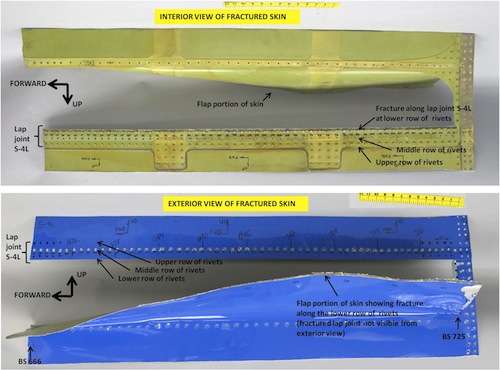 This reduction doesn’t do the image justice. Click on it to see the full-sized image at the NTSB web site.

If you’re having trouble understanding what’s what, here’s a cross-sectional drawing of what happened at the riveted joint, as if you were looking from left to right at the piece in the photo above. The joint is near the bottom of the upper photo and near the top of the lower photo. 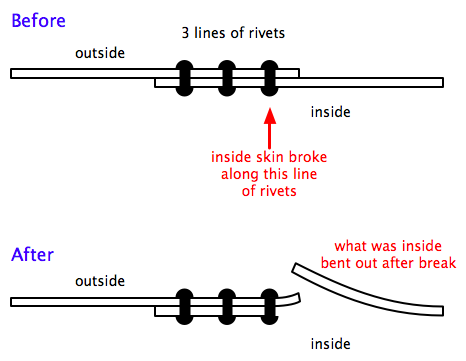 Two pieces of aluminum skin are lapped, one on top of the other, and riveted together with three lines of rivets.1 The inner sheet of aluminum ripped from hole to hole along one of the rivet lines, like toilet paper tearing at the perforations. The pressure in the cabin then pushed that piece of skin outward, creating the flap you see in the lower photograph.

The long tear was preceded by the growth of fatigue cracks out of the edges of the holes. According to the press release,

…microscope examination of the fracture faces of the ruptured skin revealed fatigue cracks emanating from at least 42 of the 58 rivet holes connected by the fracture.

So these 42+ cracks slowly grew out of the rivet holes as the cycles of takeoff and landing, pressurization and depressurization, accumulated. Eventually, there wasn’t enough competent metal between the holes to sustain the internal pressure of the cabin, and the cracks all linked up into a five-foot tear.

You’ll notice that the exterior surface is painted the characteristic Southwest blue. That turns out to be important. Again, from the press release,

The exterior surface of the skin in the area of S-4L is painted blue. Evidence of blue paint was also found inside the joint between the upper and lower skin and on several areas of the skin fracture surface. 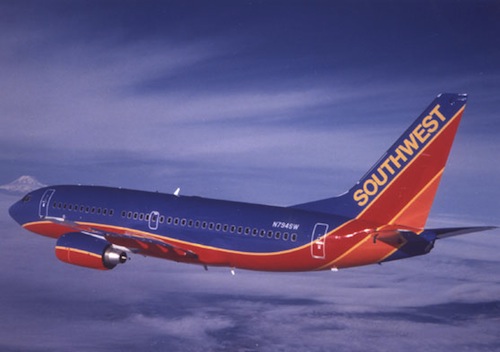 Paint inside the joint probably means that the rivets weren’t squeezing the two sheets of aluminum together tightly, as they should have been, the last time the plane was painted. More important, paint on the fracture surfaces means the cracks had already developed and were large enough to allow paint to enter them the last time the plane was painted. This fact, combined with Southwest’s records on when the plane was painted, could provide very useful information on how quickly the cracks developed and may lead to changes in the rules for how often these joints are inspected.

The rivet holes also had some anomalies:

This inspection revealed gaps between the shank portions of several rivets and the corresponding rivet holes for many rivets associated with S-4L. Upon removing selected rivets, the holes in the upper and lower skin were found to be slightly offset relative to each other and many of the holes on the lower skin were out of round.

Rivets are supposed to fill their holes. This, along with the squeezing that rivets are supposed to provide, lowers the cyclic stresses at the edges of the holes. The combination of gaps between the rivets and holes and paint between the two sheets suggests that the stresses at the holes were much higher than they should have been, a prime condition for fatigue crack growth.

Out-of-round holes are usually a strong indication of excessive stress—holes ovalize because the pull in one direction is much higher than anticipated. In this case, however, the NTSB isn’t stating clearly whether the holes were pulled to an out-of-round condition or whether they were made that way originally through some manufacturing error. It’s typically easy to tell the difference, so I suspect the investigators have a good idea which it is, but they’re waiting for further examination before making a definitive statement.

The aviation experts interviewed by the Times aren’t waiting. Every one of them thought this was a manufacturing defect—a result of sloppy drilling and poor inspection by Boeing. I don’t know if these experts have inside knowledge, are particularly skilled at reading between the lines of an NTSB press release, or are just talking out of their asses. We’ll find out when the final report is delivered.

Update 4/26/11
This last comment was maybe a little too hard on the interviewed experts. While out-of-round holes could have come from any one of a number of causes, it’s hard to imagine misaligned holes being anything but a manufacturing mistake.

Before you decide you’re never going to fly on a 737 again, you should know that recent inspections indicate that Southwest 812 was quite unusual. Again, from the press release:

“Crack indications” means that some non-destructive testing technique—eddy current testing, I assume—detected something whose electrical signal is like that of a crack. There’s no mention of whether the cracks have been confirmed by other means or how big they are. Even if the indications do represent real cracks, one or two cracks is a far cry from the 42 closely spaced cracks in Southwest 812.

The Times article isn’t terrible, but three things bothered me:

Basically, the Times article just wanders around from topic to topic, quoting experts, but never putting together a coherent story. I read it first and got the impression that there was very little new to be said. Then I read the NTSB press release and learned otherwise. Another reminder to always click the links.