I’m not a big fan of the Chicago Tribune,1 but I have to say it did a pretty good job yesterday explaining the Toyota pedal recall that’s been all over the news lately. The article is only so-so, but the graphic that accompanies it, by Phil Geib and the improbably-named Max Rust, answered many of the questions I had. 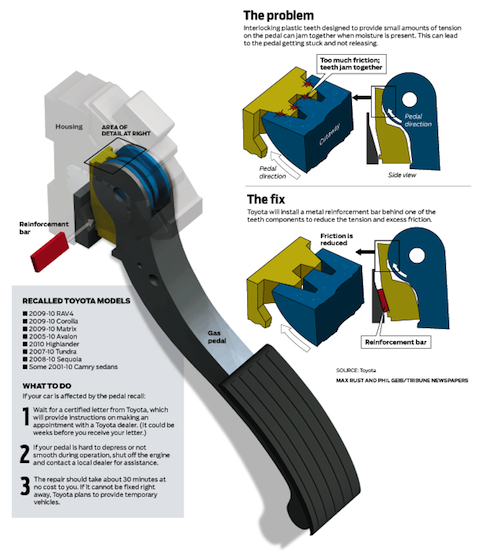 [Click on the graphic to get a slightly larger version.]

Comparing the drawings to a photo of an actual pedal (on my 2007 Camry), we see that the parts in question are all inside a plastic housing near the pedal’s pivot.

I couldn’t shoot a photo with the same point of view as the drawing because its a little cramped down there, but I think you get a sense of where everything is. In addition to the gas pedal, you can see the brake pedal (lower left foreground) and part of the steering mechanism (the shaft with the yellow-orange stripe at the upper left corner).

The gas pedal is a “drive-by-wire” system. There is no mechanical connection between the pedal and the engine; the pedal sends electrical signals that describe its position to a controller which runs the fuel injectors. (In my photo you can see the wires coming up off the top of the pivot housing and leading into a black corrugated conduit.) This is very different from the way cars used to work, and to give the pedal the traditional “feel,” Toyota has incorporated two sets of plastic teeth that rub against one another and provide some of the resistance felt by the driver’s foot.

Additional resistance comes from the pedal’s return spring, which, for clarity, isn’t included in the drawing. The return spring is what, under normal circumstances, pushes the pedal back up when you take your foot off the gas.

The toothed portions of the blue and tan parts slide on one another, the blue part rotating with the pedal and the tan part remaining stationary. The friction between the teeth is what generates the resistive force. Apparently, moisture on these plastic parts can increase the friction between them, and if the friction gets large enough, the return spring can’t overcome it and the pedal won’t return to the up position when you remove your foot. You may have heard this called “sudden acceleration” in news reports, which gives the impression of the gas pedal moving down on its own. “Stuck throttle” or “stuck accelerator” would be a more accurate name for the problem.

Toyota’s page for the pedal recall mentions wear of the plastic as another factor in the sticking pedal problem, so it’s not clear whether the problem is caused by an increased coefficient of friction, surface damage from galling, or some combination of both. Regardless, Toyota’s solution is to change the relative positions of the plastic teeth and reduce the friction.

Dealers will be installing what Toyota is calling a “reinforcement bar” (but should really be called a “spacer” or “shim” because it isn’t changing the strength of the parts, it’s changing their position) behind the tan part. The Tribune drawing does not do a good job of explaining how that shim is going to reduce the engagement of the two sets of teeth, but it seems clear that that’s the intent.

One thing I still don’t understand, and something I’ve not heard Toyota address publicly: How will the new, reduced friction affect the feel of the gas pedal? Presumably, the pedal resistance I get now will be lessened after I take my car in for the recall fix. Will it feel too floppy? If not, why did Toyota have the higher resistance to begin with?

Frankly, I’m curious why a friction mechanism was chosen in the first place. Toyota obviously wanted to get a particular relationship between the resistive force and the pedal deflection, but I don’t see why that couldn’t be achieved with a spring package of some sort. Mechanical engineers have been designing spring mechanisms for a long time and can get all kinds of force-deflection relationships.2

Maybe I’m just out of date and friction mechanisms like this are common in brake systems nowadays. If you know what other manufacturers do, I’d like to hear about it in the comments.

Update 2/4/10
I’ve known for a few days that there are “good” pedals and “bad” pedals, but it wasn’t until this morning that I learned who their manufacturers are. The good pedals, not subject to the recall, are made by Denso, and the the bad pedals, which are going to have the shim fix described above, are made by CTS.

It turns out that my pedal is a Denso. The Denso name is molded into the pivot housing, something you can’t see in my photo. Also, the housings of the two designs look very different; the CTS doesn’t have that circular area with radial spines sticking out of the side. You can see photos of the two designs at this site. Note: I am not endorsing anything said on that site, as I have not read through it in detail. I’m just linking to it as a source of photos showing the difference between the two types of pedal. It also has some nice photos taken with the housings opened.

Update 2/24/10
I’d like to say something about this week’s Congressional hearings into Toyota’s problems, especially since much of the testimony covered other explanations—mainly electronic—for sudden acceleration. But I don’t have a copy of the primary engineering report referenced in the testimony, so I don’t feel comfortable commenting yet. I was hoping the House subcommittee would post a PDF of the report, but it hasn’t so far. If you know where I can download a copy, leave a URL in the comments or send me an email directly.