Every once in a while, I spend a little time Googling to see if someone has made a personal wiki system—or any wiki system, really—that will work better for my project notes than the home-grown system I developed a couple of years ago. When I took one of those trips around the internet last week, I returned, as always, empty handed and with a growing sense that I was never going to find what I was looking for. So I’ve decided to put a little effort into my existing system and make it easier to use. 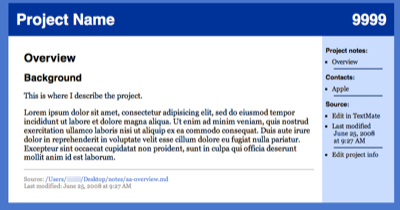 I wrote about this note-taking system, a serverless wiki, in a series of three posts back in 2008. The first of those posts described what I wanted out of the system, and the latter two posts went into how I use it and some details of the programming. At the risk of being repetitive, this is what I want in a personal wiki:

To that end, I did a little code cleanup, put it under revision control, and set up a repository for it on GitHub in anticipation of making some improvements over the next few weeks. I want to:

In addition, I may change the build system that drives the conversion of notes from Markdown (for writing) to HTML. Currently, I’m using make, which has the advantage of ubiquity, but which also has a clumsy syntax that I’ve never felt confident in using. I know there are several alternatives, but I don’t know enough about them yet to choose among them.

I probably won’t write any more about it until I think these improvements are complete, but you can follow the repository if you want to track my progress.