You may have seen “The Fiction of Climate Science,” a short article at forbes.com that tells us we should ignore the current warnings of climatologists. It’s an astonishingly dishonest (or possibly stupid, but I’m betting on dishonest) article, and it bothers me that so many people seem to be linking to it uncritically. It doesn’t take much digging to learn that the author, Gary Sutton, is lying to his audience.

There are, no doubt, plenty of people willing to put their brains on hold and believe this patent nonsense. Global warming is seen as a liberal cause, and therefore something that good conservatives—most Forbes readers, I imagine—must reject. Sutton knows his audience’s prejudices and knows he can get away with dopey arguments.

Not surprisingly, Al Gore makes an appearance in the article. Conservatives take it as an article of faith that Gore is the evil international head of the global warming conspiracy. Sutton says Gore “thought he might ride his global warming crusade back toward the White House.” How Gore expected to be elected without actually running in either 2004 or 2008 is a detail that Sutton knows he can safely ignore.

Perhaps my favorite part of the article is its opening, which tells us that the government now pushing a global warming lie was, in the mid-70s, pushing a global cooling lie. I do, in fact, remember stories from back then about the possibility of a coming Ice Age, but they were popular accounts and pretty speculative. I’m pretty sure I read a Science Fact article about it in Analog. I don’t want to slag on Analog, but one of its earlier Science Fact pieces—back when it had the much cooler name Astounding Science Fiction—was L. Ron Hubbard’s original Dianetics article, the founding document of the Church of Scientology. Hail, Xenu! 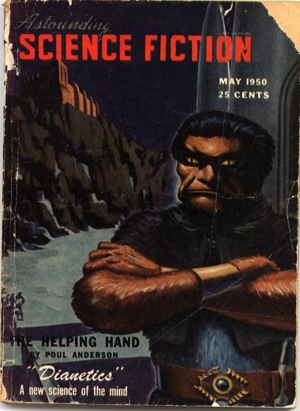 Sutton points to a book called The Weather Conspiracy, which he says was part of the government’s push to get us to believe in a coming ice age. 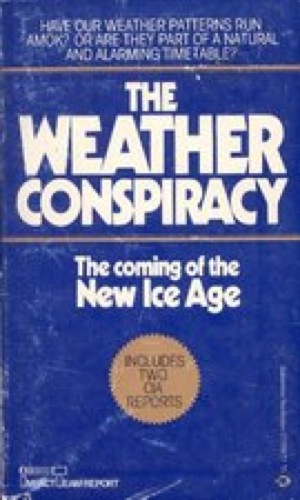 As you might guess from the cover, this was not a government publication, as Sutton would have us believe,1 nor was it a weighty scientific tract. According to this contemporaneous review written by an actual scientist, The Weather Conspiracy was more of a “pot boiler” which didn’t acknowledge that “we just don’t know enough to chose [sic] definitely at this stage [1977] whether we are in for warming or cooling—or when.”

In 1974, the National Science Board announced: “During the last 20 to 30 years, world temperature has fallen, irregularly at first but more sharply over the last decade. Judging from the record of the past interglacial ages, the present time of high temperatures should be drawing to an end…leading into the next ice age.”

Well, that sure looks like scientists had come down strongly on the side of cooling. But, gosh darn it, Sutton seems to have had some trouble in copying that quote. First, it’s a synthesis of two quotes. The first sentence was written in 1974, the second in 1972. Let’s look at that 1972 quote as a complete sentence:

Judging from the record of the past interglacial ages, the present time of high temperatures should be drawing to an end, to be followed by a long period of considerably colder temperatures leading into the next glacial age some 20,000 years from now.

Had Sutton included the part about 20,000 years, it wouldn’t have seemed quite so alarmist and wouldn’t have supported his thesis so well. So he just left it off. Even less supportive of his thesis is the very next sentence:

However, it is possible, or even likely, that human interference has already altered the environment so much that the climatic pattern of the near future will follow a different path.

Well, shit, we can’t be quoting that. Best to just leave it out. After all, who’s going to bother looking it up? No one at Forbes, obviously.

By the way, researching this doesn’t take a staff of crack librarians. There’s a Wikipedia page with all the links you need.

So, in the end, what do we have? An article with a ridiculous conspiracy theory propped up by selective and dishonest quoting. Presented to us by a publication that can’t be bothered to do elementary fact checking. This is the face of climate change denial.

Update 12/8/09
There’s now a post up at fair.org that makes some of the same points I do using rather similar language. I hope it’s just coincidence.