I really like the direction GeekTool 3 is going, but I just can’t keep using it until its stability and memory issues are resolved. So it’s back to version 2.1.2.

As I said in this post last month, GT3 has a wonderful new user interface that lets you control your Geeklets’ properties in a single HUD panel and position them by dragging them around on your Desktop.

Unfortunately, GT3’s memory consumption is huge compared to GT2, and increases more rapidly. It’s not unusual for it to run up over 100 MB in about a day, after starting at 25-30 MB. Worse, when I try to disable and restart it to reclaim that memory, it crashes System Preferences more often than not. It just isn’t ready.

Luckily, version 2.1.2 will work in Snow Leopard, although I can’t get its menu to show up. I’ve made some small changes in the Geeklets I use and how they’re arranged. 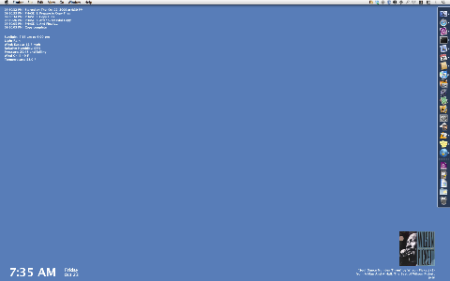 In the upper left corner, I have both my SuperDuper! status monitor and my current weather monitor. 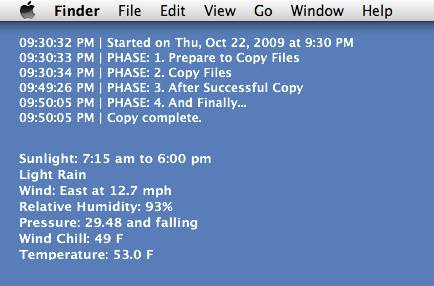 The lower left corner has the time and date.

This is new. The time is handled by this shell one-liner

where the output of date is piped to Perl to get rid of the leading zero, if present. The date comes from this one-liner

which again uses date and pipes the result to Perl to get the linefeed between the day of the week and the date. With this on the Desktop, in a font that’s bigger and easier to read, I’ve removed the time from my menu bar.

The lower right corner displays the iTunes album art, the track name (from iTunes or Pandora, depending on which one I’m listening to), and the current GeekTool memory use. 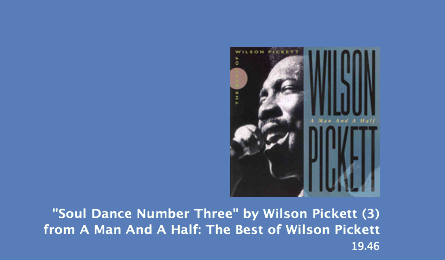 When the memory use creeps up—which it does in GT2, just not as quickly as in GT3—I disable and reenable GeekTool to get it back down to a reasonable level.

Update 11/16/09
Turns out I was partially wrong about this. Although GeekTool 2’s memory would creep up under Leopard, under Snow Leopard the usage seems to stay right around 20 MB no matter how long I have it running.

With the exception of the memory monitor, all the Geeklets are positioned far enough from the edge of the screen so they’re not obscured by the Exposé Show Desktop command.

I’ll keep an eye on GT3’s progress and give it a try when new versions come out. But I won’t use it regularly until its memory and stability problems are solved.