The new version of Simplenote came out today, and although it’s fixed many bugs, it still has the bug that bothered me the most. 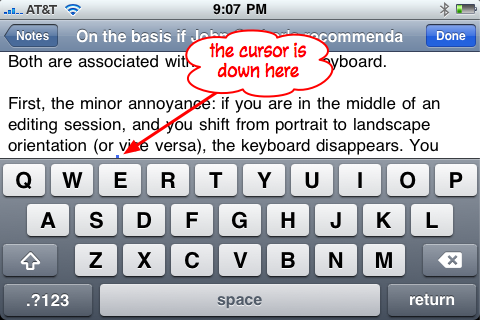 In other Simplenote news that annoys me, Cloud Factory has apparently released it beta API to a select group that doesn’t include me, despite my being told that I was in the beta group. Listen, Cloud Factory, a super programmer like Alex Paine isn’t going stress test your API the way a klutz like I could.

I guess I’ll just have to grab Simplenote.py from al3x’s GitHub repository.

Update 8/31/09
It’s hard to stay mad at guys who apologize so quickly. But I still don’t understand how the scrolling bug slipped through again.