Back in October I wrote a script that would collect all my Twitter updates from the previous day and create a blog post from them. As the months have gone by, I’ve found and fixed some bugs and added a feature or two. I decided it would be a good idea to post the updated script.

The main goal of script hasn’t changed since my original post:

First, some motivation for the script. For a few months now, I’ve been including my recent Twitter posts in the sidebar over at the right. I followed the directions Twitter gives, following the HTML/JavaScript method so I could use CSS to style the tweets and match the look of the site. It’s easy, but it does tend to put the tweets in a ghetto. They’re out of sync with the regular posts and don’t get archived. Since many of my tweets would have been tiny blog posts in the pre-Twitter days, I thought they should be added like regular posts.

On the other hand, I didn’t want every tweet to have its own post. A daily collection of tweets seemed like the best compromise. My goal was to write a program that would run every day, gathering all the tweets of the previous day and putting them into a single post, timestamped and separated by blank lines.

A secondary goal has arisen since October: I’ve noticed that Twitter’s search doesn’t work well for older tweets, which makes it hard to find what you wrote months ago. For example, on April 25 I was hit by a pickup truck while riding my bike, and I tweeted about it when I got home an hour or so later. Using search.twitter.com to find posts written by me in April with the word “pickup” comes up empty. But if I type “pickup” in the little search field over to the right, I quickly find the automatic post that contains that tweet. It’s not that the tweet has been erased by Twitter—here it is—it’s that Twitter’s search engine won’t find it. So the automatic posts act as an easily-searchable archive of my tweets.

The script, which I call twitterpost, relies on four nonstandard Python libraries

Here’s the source for twitterpost itself:

The main differences with the original twitterpost are:

A description of the rest of the script can be found in the original post.

The script is run every day at 1:00 am by launchd. I use Lingon to configure launchd. 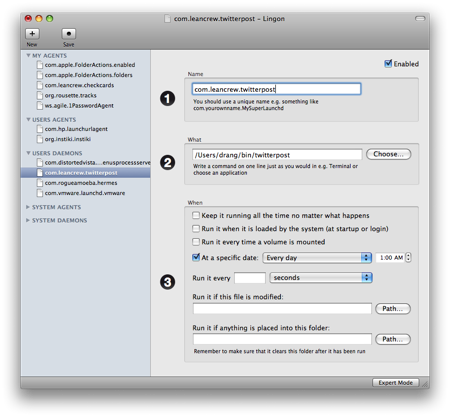 If you subscribe to my RSS feed and don’t want to see the twitterpost entries, you can use this Yahoo! Pipes feed, written by Patrick Mosby to filter them out.