PCalc 1.7 just hit the App Store, and it is—despite the meager 0.1 increment in version number—a major update to the iPhone’s premier calculator application. The new and/or improved features (in order of importance1) are:

We’ll look at each of these features in turn. Let me first point out that I’ve written several earlier posts on PCalc. Most of what I wrote in my series of Definitive Posts on PCalc (part 1, part 2, part 3, and part 4) and my descriptions of the version 1.5 and version 1.6 updates still holds and won’t be repeated here. This will be just the new stuff. I should also mention that I use PCalc’s RPN mode exclusively—improvements to its algebraic mode fly under my radar, and I can’t comment on them.

PCalc can display digits in a manner reminiscent of older physical calculators, imitating either LCD elements or chunky pixels. Because I am in my late 40s and have the faltering eyesight of middle-age, I have always prefered the Easier to Read digits, even though they weren’t as easy to read as i would have liked.

Actually, the digits themselves were pretty easy to read, it was the tiny comma and decimal point that I had trouble with. James Thomson, PCalc’s developer, bulked up the punctuation several point releases ago, which worked pretty well; but when he later introduced the two-line display, the punctuation shrunk back down to a size I found hard to see.

But with 1.7, Thomson has introduced fonts with big, robust commas and decimal points that aren’t squeezed tightly in between the numerals.

The new display can pass the most stringent of visibility tests: that of a tired middle-aged man trying to do a few calculations on a late night flight.

PCalc has always had a memory slot, and it’s always had a stack that can be loaded up with lots of values. But most serious scientific calculators have serveral memory slots that are quickly addressable. Now PCalc joins them with ten memory slots, labeled 0–9. To store a value in memory you

The value is now stored in that memory slot. To retrieve a value from memory, you 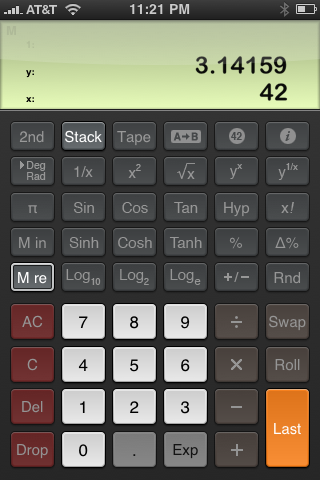 The value will be copied from memory and pushed onto the stack.

NB: if you retrieve from a memory slot that hasn’t had anything stored in it, zero will be pushed onto the stack. As I consider zero to be distinctly different from empty, I see this as a flaw. Fortunately, it’s a flaw that does no damage. No items on the stack are destroyed by errant zero, and you can always return to the state before the inadvertent retrieval by Dropping the zero.

After several calculations, my stack is usually cluttered with old results, and it would be nice to blow them away with a single command. PCalc has the AC (All Clear) button, but pressing it has the unfortunate effect of clearing the memory in addition to the stack. This is an even more destructive operation now that there are 10 memory slots. Fortunately, PCalc 1.7 comes with a new SC (Stack Clear) button that will clean your stack while leaving your memories intact. It’s accessed through the 2nd key. 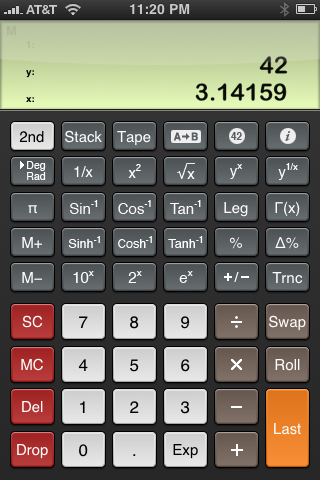 For you Phil Dick fans, 1.7 also has an MC (Memory Clear) button that does just the opposite: erases all your memories while leaving your stack in place.

PCalc has had an optional two-line display since version 1.2. Now you can chose to have up to four lines in the display, and the lines don’t have to be values on the stack. The settings let you choose from many options.

Right now I’m using a three-line display of the stack.

If you follow James Thomson on Twitter (@jamesthomson), you know that he spent a lot of time working on PCalc’s code to get it to launch more quickly. He succeeded. While PCalc certainly doesn’t start as quickly as Apple’s standard iPhone calculator, it’s become quite peppy. And it presents a cute aphorism to amuse (i.e., distract) you as it gets going. 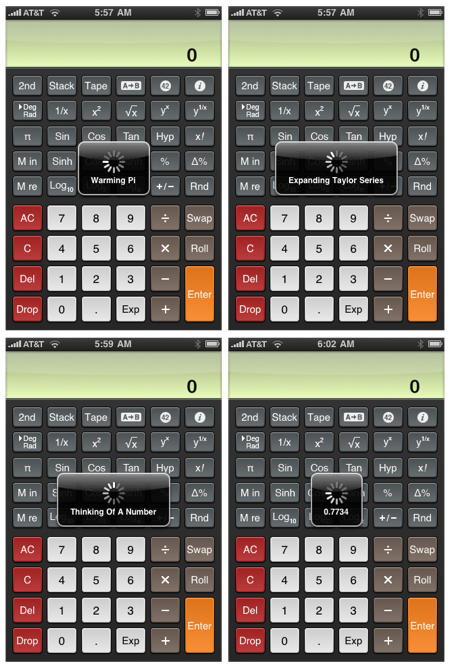 There are many of these, all with a math or calculator theme.

Turning on the HP48 Style RPN option (it’s in the Advanced settings) eliminates a behavior that’s been bothering me for ages: the duplication of the x-register into the y-register when the Enter key is pushed. Here’s the scenario:

This is batty. Pressing Enter should just enter it (hence the name) in the x-register—there shouldn’t be a second copy of the value in the next stack position. I know that some calculators act this way, but that doesn’t make it right.

If you turn on the HP48 Style RPN setting, PCalc 1.7 does the right thing: it enters the number in the x-register and waits for you to type another number before pushing the entered value into the y-register.

There are now US and UK versions of the teaspoon, tablespoon, and fluid ounce so US cooks aren’t confused by a cup with 8.11537 fluid ounces.

The new Do Not Rotate setting will lock PCalc in portrait mode, which can be handy if you find yourself holding the calculator in a variety of orientations as you move around, write, adjust an instrument, etc. Locking isn’t a big deal for me, but I can see where it would be very useful for some people.

It should be noted that you cannot lock PCalc in the horizontal mode. Although you can turn on the Do Not Rotate setting while the calculator is horizontal, it will shift to portrait mode the next time the calculator is turned vertical and will then be locked in that position.

I bought PCalc at version 1.0.x, and it’s been my calculator ever since. I use it more than my physical HP 35s calculator, even when I’m at my desk and the HP is within reach. It’s annoying that the 35s refuses to mutate when I press the ↰ and ↱ keys.