For the past week or two I’ve been seeing new birds along the bike path in Springbrook Prairie. They tend to sit in the grass along the side of the path, hidden until I roll up next to them, when they fly out and find another place to hide. Unlike the red-winged blackbirds that like to perch on stems or surveyor’s stakes, these guys like to stay low and hard to photograph.

Yesterday, on the way home from work, I managed to get a few shots that allowed me to identify them as bobolinks. (Yes, that’s a bobolink link. It goes to a page on the wonderfully-named allaboutbirds.org, a site run by the Cornell Lab of Ornithology.) The first decent photos came as I snuck up on a fellow who strayed out of the grass and onto the limestone path. 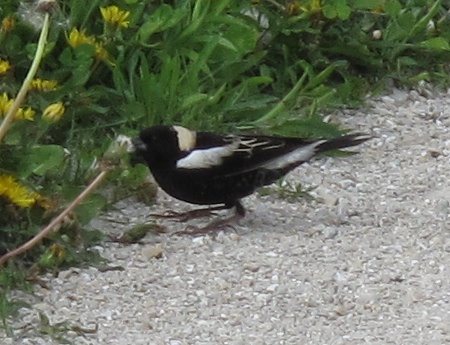 Even walking as slowly and quietly as possible, I couldn’t get closer than 30-40 feet from him. This picture was taken with my Canon G10 fully zoomed, and even so, the bird is just a small splotch in the center of the frame. The uncropped original is here.

Failing in my attempts to sneak up, I decided to just ride along the path with my camera in my right hand, snapping as the birds flew out of the grass. Most of these shots stunk, but the last one managed to be reasonably focused and sharp and caught a cluster of three bobolinks flying up with the tall prairie grass behind them. 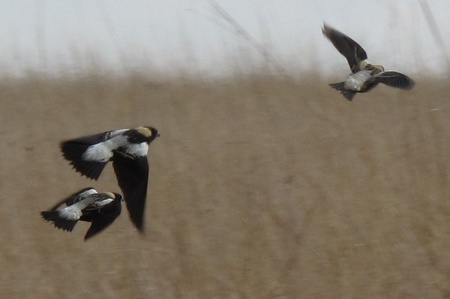 You can click the photo to see a bigger version. It’s cropped down from this original. The right edge of the original also has this guy. 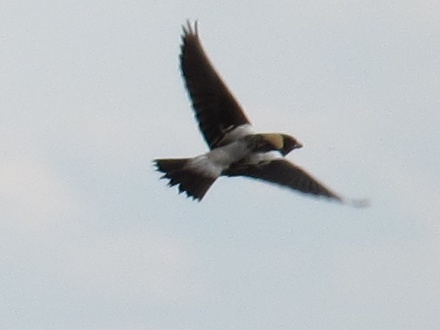 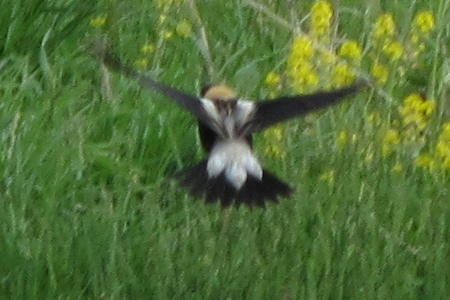 According to the Cornell site

A distinctive bird of open grasslands, the Bobolink is the only American bird that is black underneath and white on the back. This coloring makes the male stand out while he is performing his displays. After breeding he changes into a drab, camouflaged plumage to spend the rest of the year.

So I guess the markings, which were what drew me to the birds in the first place, will be fading soon. Bobolinks are as tough as they are pretty; they winter down in the middle of South America, flying up here—and further north—every spring to breed. 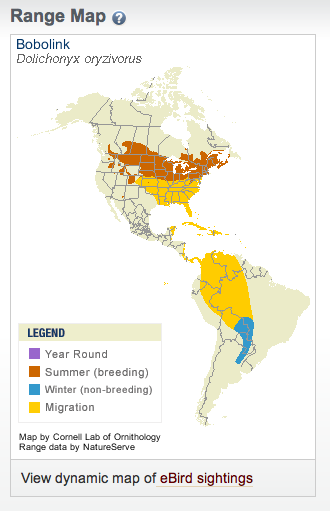 I’ve been riding the path in Springbrook Prairie ever since it opened a few years ago, and this is the first time I’ve noticed bobolinks. Apparently I haven’t been very observant. A link from the Cornell site took me to ebird.org, a site where birders can record and share their observations. The map of Springbrook Prairie shows several bobolink sightings around this time last year. I’m no trained birder, but I’m sure I saw a 2-3 dozen yesterday. 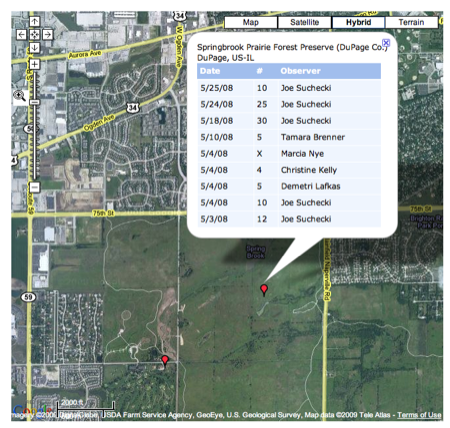 Clicking this image will take you to a Google Maps-style page at ebird.org with bobolink sightings in DuPage County.

The bike trail through Springbrook Prairie is on my route to and from work from April through November. This year, I’ve decided to get a bit more serious about photographing its changes through the seasons. I’m also interested in recording the progress of the new wetland restoration project. I’ve created a photo set on Flickr to keep all my shots of the preserve. There are a few other bobolink photos in that set.