Tweetie for the iPhone

I’ve been using Tweetie as my Twitter client on the iPhone for a few weeks and have been quite happy with it. A new version (1.1) was just released, which fixes the few complaints I had.

For a long time, I used Hahlo, a web app, as my Twitter client. despite its being limited to webish controls and layout, I liked its user interface and even created a site-specific browser in Fluid to run Hahlo on my Macs. But eventually I tired of Hahlo’s biggest drawback: when using Hahlo, you are relying on the speed and uptime not only of Twitter’s servers, but also of Hahlo’s. Too often, Hahlo’s servers (server?) were slow or down, and I’d have to move over to m.twitter.com.

Twitterrific, of course, is available on both the Mac and the iPhone and is the 800-lb gorilla of Twitter clients. I’ve used it on both platforms and just never really warmed to it. I suppose my indifference toward Twitterrific is due largely to my general dislike of white-on-black user interfaces, but I’m certain there’s more to it, even though I can’t put my finger on it.

Tweetie seemed right as soon as I started using it. First, it looked good. I know many people were put off by the iChat-like speech balloons it used to surround tweets, but I thought they made for a good visual break between tweets without taking up too much space. It was responsive—or as resposive as Twitter’s servers allow—because it talks to Twitter directly, rather than through another server. The user interface was well thought out: the features you use all the time (reading and writing) were up front; the features you use less often (looking at profiles, following a link) were available, but didn’t clutter the main page. It had, like NetNewsWire, a built-in browser for following links without leaving the application for Safari. There’s an option in the browser for opening a page in Safari if you want—because the Tweetie browser doesn’t allow landscape views, for some pages Safari is the better option.

The new version of Tweetie has all of these good points and has made some fixes and additions: 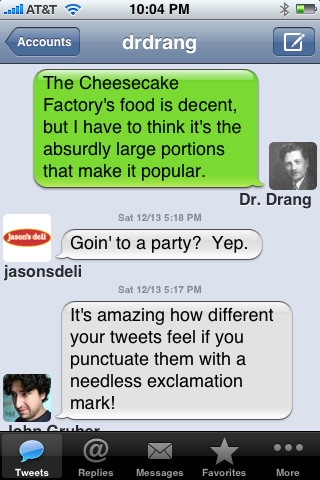 Normal tweets have a very light gray background, your own messages have a green background, and—if you use the Chat Bubbles theme—your avatar is on the right instead of the left. The little row of icons across the bottom bar seem pretty self-explanatory. @ Replies are colored blue 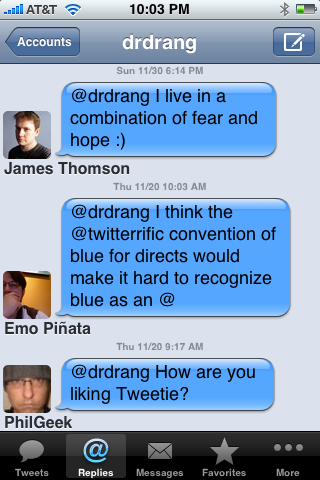 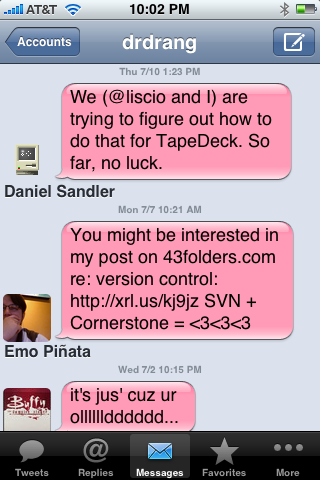 I’m not thrilled with that pink, but I get direct messages via email, so I don’t have to look at it. If you use the Simple theme, the colored backgrounds are somewhat muted.

The More button takes you to this secondary screen 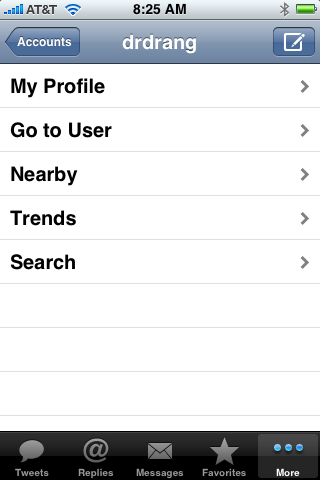 The options do what you probably expect; they’re similar to links on the main Twitter web interface.

Tweetie costs $2.99. Well worth it if you use Twitter a lot from your iPhone. Here’s a direct link to Tweetie at the App Store.