From Quicksilver to LaunchBar

Two months ago I mentioned that I was considering a switch from Quicksilver to LaunchBar. The motivation for the change was Alcor’s discouraging comments about Quicksilver’s future—and future stability—in this interview. I’ve now been using LaunchBar exclusively for the past couple of months and have never even been tempted to go back.

LaunchBar is certainly not as full-featured (over-featured?) or as flashy as Quicksilver, but it’s been fast and rock-solid on both my computers for these past two months. Quicksilver would often take its sweet time bringing up its command interface, was something of a memory hog, and occasionally ate up so much of my iBook G4’s processor time that I’d have to kill and restart it. Never had any such problems with LaunchBar; it’s been well worth the license fee.

LaunchBar has forced me to adopt a couple of other utility programs to make up for two Quicksilver features it lacks: 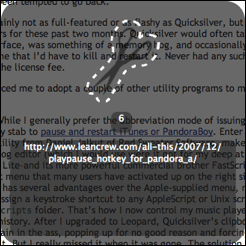 Another difference between LaunchBar and Quicksilver made itself known when I started running my “surl” and “furl” AppleScripts. These scripts take the URL of the frontmost Safari window and put it in the clipboard—surl passes it through the Metamark URL-shortening service first. While Quicksilver would disappear after running the script, LaunchBar hangs around and has to be manually dismissed. I mentioned this in my post two months ago and got an email from the developer, Norbert Heger of Objective Development, the next day. According to Norbert, LaunchBar stays active in case the script produces output that LaunchBar can further process. Since my scripts don’t produce any output, the waiting just gets in the way. The solution, kindly suggested by Norbert (and which I would have found in the help file had I looked more carefully) was to add this line to the end of those scripts:

Now LaunchBar puts itself away after the script has run.

(I wrote most of this post in a Starbucks, killing time while my son was at basketball practice. I’ve never tried working at a Starbucks before and I don’t think I’ll try again. The music was too loud—although a lot of it was from Stax, so at least I was entertained while being distracted—and so were the cellphone conversations of the young woman sitting a few tables away from me. I often see students studying at Starbucks; do they have greater powers of concentration than I do, or are they just fooling themselves?)