Quite a while ago, I posted an article that showed how to make a Hipster PDA card with Celsius-Fahrenheit conversion scales. At the time, I thought it would be good to combine the scale that dealt with the range of temperatures people normally experience with a currency conversion scale; a single card with a handy reference for people traveling in a foreign country. I thought about it, but I didn’t do it until my wife and daughter were a day or two away from taking off on a spring break vacation to Europe. The card looks like this: 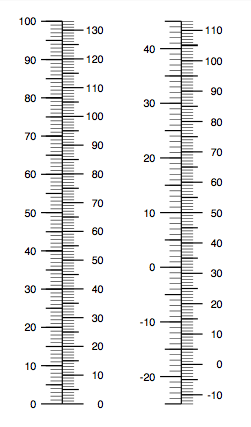 The code for the card is written in PostScript and can be easily updated for the current exchange rate. Paste it into a plain text file and give it a “ps” extension.

After the boilerplate comments, a few utility functions are defined: one for converting inches to points, one for printing right-justified text, one for printing out series of hashmarks, and a few for manipulating the PostScript stack. (PostScript, like Forth, is a stack-based, postfix language.) The “blue book” mentioned in the comments is Adobe’s PostScript tutorial, which you can download from here.

The next section draws the currency conversion scale in the left half of the card. Although the comments, the variable names, and the current exchange rate are geared to a conversion between dollars and euros, the scale could be used to convert between any two currencies. The only thing that would need to be changed is the exchange rate, which is embedded in this line

Just change the number from 1.3308 to whatever the exchange rate is and you’re good to go. Even if you want a euros/dollars scale, you’ll probably want to change that number to the current rate. I got the exchange rate from Google: type “1 euro in usd” into the Google search field, and Sergey and Larry will give you the rate. (I just did it and found that the rate has gone up to 1.3367, so I’ll be paying for an ever-so-slightly more expensive vacation.)

Let’s talk about printing the card. First, you’ll notice some comments about starting so many inches in from the left edge and so many inches up from the bottom. The commands associated with these comments put the scales in an index-card-sized area at the top center of a piece of US letter paper. US letter is the default paper size for my printer, and when I stick an index card into the manual feed tray, these margins put the scales right where I want them. 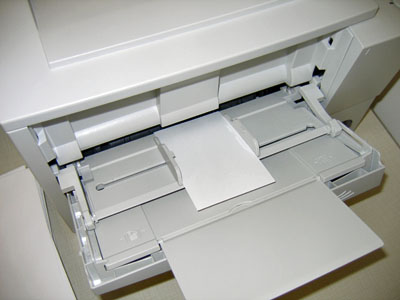 If the sliding guides in your printer’s manual feed tray set the index card at the left or right edge instead of in the center, you’ll have to change the margins. The comments should be a pretty good guide (ho-ho) to changing the margin command.

If you don’t have a PostScript printer, you’ll probably want to convert the file to a PDF before printing. My favorite tool for this is ps2pdf, which comes with Ghostscript, the free PostScript emulator. I use the MacPorts (née DarwinPorts) Ghostscript package. If you have an Intel Mac, you can do the conversion by opening the PostScript file in Preview. I don’t recommend this approach for PPC Mac owners; I tried converting this file with Preview on my iBook G4 and had to kill it after several minutes of spinning beachball (the Activity Monitor said Preview was taking up about 80% to 90% of the CPU time and was “Not Responding”). I have no idea why Preview works well on an Intel and bogs down on a PPC, but that’s been my experience every time I’ve tried to use it to convert a PostScript file. Don’t fear the command line:

will create a filename.pdf file in the same directory in a couple of seconds.

Linux users that want to convert the file to PDF will almost certainly have Ghostscript and ps2pdf on their machines. I have no idea what will work best for Windows users and have no desire to figure it out.

Happy traveling! Send me an e-postcard if you use this.

Update I’ve rewritten this to generate a PDF directly. The new version is also easier to customize for other currencies and written in a more common language, Ruby. You can see the new version here.