In my first and second posts about the LGTD bundle, I showed how to install and configure the bundle and, very briefly, how to use the bundle to organize your next actions lists by project and context and how to print your lists out onto index cards. In this post, I’ll describe the snippets that make the bundle a bit faster.

The first snippet, called “new project,” looks like this: 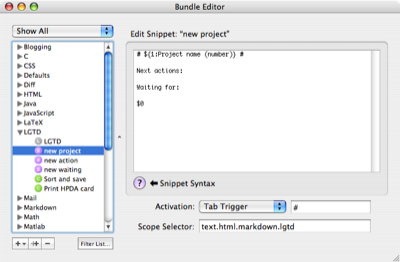 It inserts a template with

This snippet is, of course, meant to be used in the “projects.gtd” file. You use the snippet by typing a hash mark and pushing the tab key. After the template is inserted, you can position the caret within the template and use either of the other two snippets. 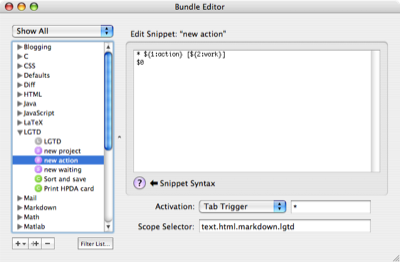 It inserts a template with

I’ve seeded the context with “work” because that is my most common context and making it the default saves me some typing. You may find your most common context to be “computer” or “home”—if so, don’t be shy about changing the snippet to meet your needs. This snippet is intended to be used within the “Next actions” section of a project. You use the snippet by typing an asterisk and pushing the tab key.

The “new waiting” snippet does so little it probably shouldn’t even exist. It’s intended to be used in the “Waiting for section of a project and is invoked by typing a hyphen (-) and pushing the tab key. I won’t insult you by describing what it does, but here’s what it looks like: 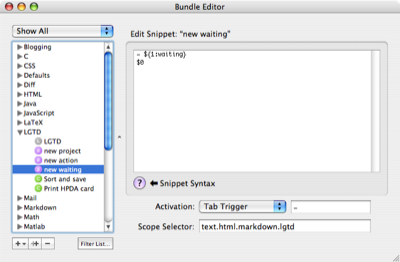 Two things about this snippet that I should mention:

With a little experimenting, you’ll see how the snippets work and you’ll probably start to think about how you should customize them. In the next post, we’ll look at the scripts that coordinate the lists, which will give you further opportunities for customizing.

Update Later posts on LGTD are here and here.