Earlier this week, there was a thread on the TextMate mailing list about creating footnotes in text files. It was suggested that MultiMarkdown had a good footnote implementation and that my reference link macro/command/snippet system could be modified to make MultiMarkdown footnotes. As I was going to be spending some downtime this week flying and sitting in airports, I told the list I’d work it out and get back to them. So, thanks to a couple-hour delay at O’Hare, here it is.

The MultiMarkdown way of making footnotes follows the method described in this Markdown mailing list thread. It is apparently the format favored by John Gruber when he writes his Daring Fireball posts even though it hasn’t made its way into his version of Markdown yet. Basically, you stick [^x] at the point you want the footnote marker to appear, and [^x]: footnote text at the bottom of the document. The “x” between the square brackets can be any string of characters. The format is basically the same as that for reference-style links, but with the addition of the caret character (^), which cleverly suggests the superscript commonly used for footnote markers.

As with the reference-style link system, the footnote-making system consists of a command that inserts a snippet and a macro that calls the command.

First, we create a new command called “Footnote” in the Markdown category of the Bundle editor and insert the following Perl code:

This command assumes that all the text is selected from the point at which the footnote marker is to appear to the end of the file (that’s the $ENV{'TM_SELECTED_TEXT} part). Your Bundle Editor window should look like this: 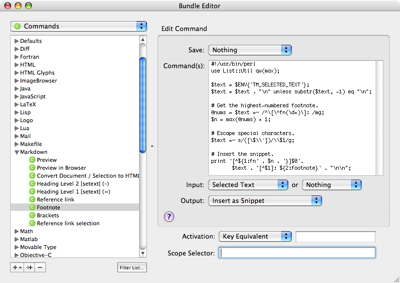 We now create a macro that makes that selection and calls the command. Start with a file that has some text and a couple of blank lines at the end. Then:

At this point, it’s probably best to test out the macro a few times by choosing Replay Scratch Macro from the Automation menu. When you’re convinced it’s working, choose Save Scratch Macro… from the Automation menu and save it with the name “Footnote” in the Markdown section. Use whatever Tab Trigger or Key Equivalent you like (I chose a Key Equivalent of Control-F) and set the Scope Selector to “text.html.markdown.” Your Bundle Editor window should now look like this: 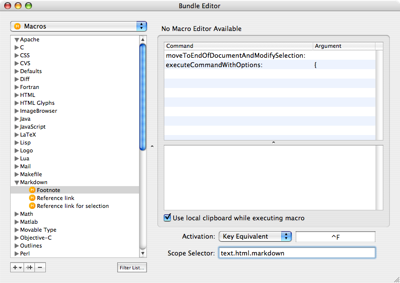 There are two oddities you may be wondering about:

The simple answer to both these questions is that MultiMarkdown won’t work otherwise. I haven’t looked into the code to see why, but MultiMarkdown doesn’t recognize footnote markers with just a single digit after the caret. And it also gets confused by multiple footnotes unless they’re separated by a blank line. My first thought is that restrictions are bugs in the implementation, but maybe there’s a good reason for them.

One more thing. If you start using footnotes and processing them through MultiMarkdown, you’ll soon find you need to create a “footnote” class in your CSS stylesheet. Otherwise, the footnote numbers will not be superscripted. And you’ll have to create a “reversefootnote” class if you want the footnotes themselves to have a different style (e.g., a smaller font size) than the regular body text.