A while ago I wrote about how I print my itinerary and other useful info (like alternate return flights) on a 3x5 card that I stick into my HPDA just before a trip. Since then, I’ve been traveling more for both business and pleasure, and I’ve honed my technique for making the cards.

I have only two criteria for the cards:

Initially I used a plain text file in BBEdit and used some special print settings to get a nice-looking font and the proper sizing. Too much fussing and too many retries as the line breaks often had to be changed to make things fit.

Then I went to AppleWorks. Not as much fussing over layout because the rulers give more control, but still more than I wanted. Also, pasted-in info from web sites carried its style with it, which was never the style I wanted on the card, so I’d have to keep resetting the font and font size. And AppleWorks takes longer to start up than I’d like. (TextEdit starts up fast, but can’t be used for printing on index cards because the left and right margins can’t be made smaller than 1 inch.)

Finally, I bit the bullet and wrote the program below. It takes a plain text file with a few formatting clues and generates and prints a card. Assembling the data in BBEdit (or Vim or TextMate or …) is simple and fast. The layout is clean and definitely consistent because it is built into the program.

The things to remember are to use the vertical bar (|) as the tab and a line of at least two hyphens as a page break. The vertical bar may seem funny, but it’s much easier to see a | than a tab (no, I don’t like to run BBEdit with the “Show Invisibles” setting turned on), and I’ve used this convention in several programs, so I’m used to it. Similarly, ----- is easier to see than an invisible page break character. When I need more than one page of travel info (which has only happened twice), I print on both sides of the card.

After I issue the command and feed it the input file, I walk over to my printer, which is blinking for paper, and feed it an index card. Voila! This magic comes courtesy of Perl’s ability to pipe, which you can see in the open OUT, "| groff -P-m | lpr"; line near the end of the program. The troff codes that the program generates are piped into groff, which—because of the ‘-P-m’ option—embeds a manual feed command in the PostScript output. The PostScript is then piped to my default printer, which is a PS printer.

If I didn’t have a PostScript printer, I might be forced to pipe the PS through Ghostscript to get it in a form my printer can handle. (In Linux, this is unnecessary: the printer drivers do it for you.) Or I might pipe it through ps2pdf to create a PDF file, which I would then print using Preview or Acrobat or whatever.

An example input file is this 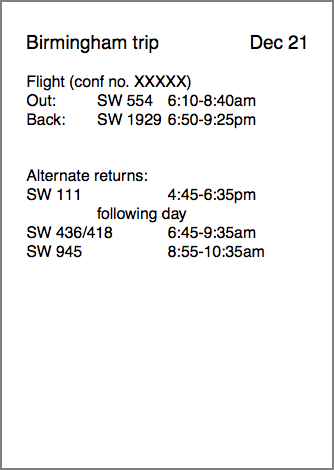 Update
If you have OmniOutliner (it came free with my iMac), you may want to use it to format your trip card. I have a template and some instructions here.